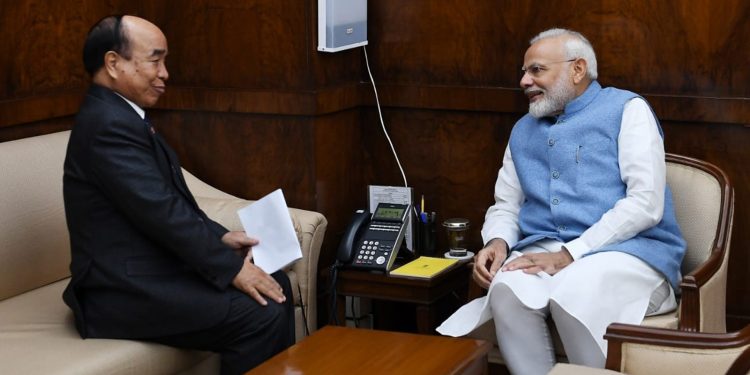 In his meeting with Prime Minister Narendra Modi at the latter’s office in New Delhi, Zoramthang urged the Modi to clear ‘The Mizoram Maintenance of Household Register Bill, 2019’ which was passed by the state Assembly on March 18, an official source said.

The bill, which seeks to detect foreigner and check the influx of illegal Bangladeshi immigrants in the state, is awaiting assent from the state governor.

The governor has referred the bill to the Centre.

Zoramthanga told the Prime Minister that the bill, when enacted, would help the government in maintaining law and order and protection of the state’s boundary, sources said.

The Mizoram chief minister also urged the PM to make arrangement for creating a separate cadre for Mizoram in All India Services.

He told the PM that separate cadre in IAS, IFS and IPS would help in expediting government functioning in Mizoram.

Citing that the existing fund allocation to DoNER ministry and North Eastern Council is pathetically not up to the mark, Zoramthanga requested the PM to raise fund allocation in both the ministries to usher in development in the entire Northeast region.

He also underlined the importance of upgrading the lone Zoram Medical College into medical college-cum-hospital akin to AIIMS, which in turn will benefit not only Mizoram but all the neighbouring states.

The two leaders also discussed a wide range of issues, including the Citizenship (Amendment) Bill.

The meeting was crucial as Mizoram has witnessed massive protests against the bill.

The Union Cabinet on Wednesday approved the new draft bill to amend the Citizenship Act, 1955, which is likely to be tabled in both the Houses of the Parliament next week.

Reports said the Inner Line Permit areas of Arunachal Pradesh, Nagaland and Mizoram and Sixth Scheduled areas in Assam, Meghalaya and Tripura are being kept out of the purview of the amended Bill.

Zoramthanga, who is in the national capital, also called on union finance minister Nirmala Sitharaman on Thursday, an official statement said.

The duo discussed on the issue pertaining to allocation of more fund to Mizoram under Japan International Corporation Agency (JICA) and other foreign agencies.

The chief minister proposed to construct some of the roads in Mizoram under JICA funding, the statement said.

The two leaders also discussed about proposals to develop the towns in Mizoram.

Mizoram has been deprived of direct flight service with the national capital after Jet Airways withdrew operation in February.

At present the state has air service on the Aizawl-Guwahati-Imphal- Kolkata route operated by Air India and Go Air.