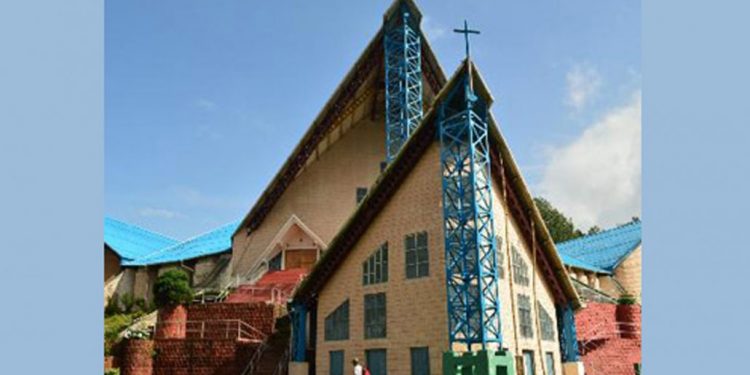 A church. (Image for representation).

Mizoram Kohhran Hruaitute Committee (MKHC), a conglomerate of leaders of major churches in Mizoram on Friday vehemently condemned the attack on a religious place at Assam’s Hailakandi district by unidentified miscreants.

In its meeting held on Friday, the committee reviewed the incident that took place at Gharmura in Hailakandi district on Tuesday night wherein unidentified miscreants attacked a Presbyterian mission school (mission compound) and beaten up the school headmaster and his family members.

“The Church Leaders Committee is deeply hurt to learn the disgraceful and hideous act of atrocity and vandalism on the headmaster, H. Vanlaldika and his family members inflicting severe injuries to them,” a statement said.

It is a universal dictum that religious shrines and places have been a place of refuge and safety against communal chaos and civil barbarism, it said.

Terming the attack “unfortunate,” the committee demanded and appealed to the legitimate authorities to bring the miscreants to justice to the highest degree within the law and take appropriate steps to safeguard the safety and security of the victims of the communal riot and restore normalcy in the region.

The committee further prayed for peace and restoration of normalcy on the Mizoram-Assam border and asked every citizen of the area to refrain from any kind of activities that could escalate communal disharmony.

In what is believed to be the fallout of the border dispute at Zophai or Kachurthal area, unidentified miscreants stormed a Presbyterian school at Gharmura on Tuesday night.

The school headmaster H. Vanlaldika, his wife and three children were injured in the attack and were admitted to a hospital in Aizawl.