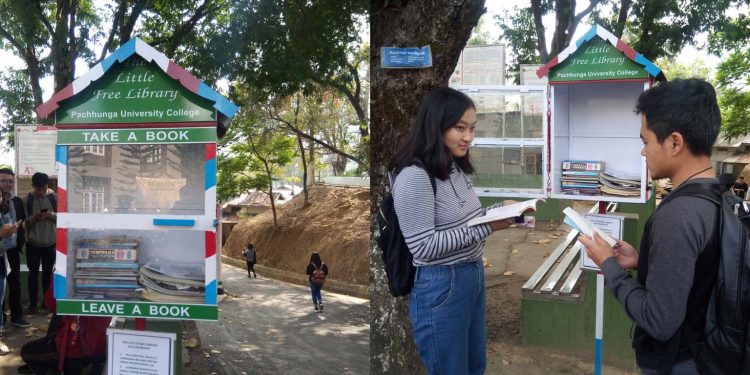 After hitting the headline for being branded as “no honking city”, Aizawl has yet again won rounds of applause on the internet for its Little Free Library or mini library being installed roadside across the city.

At a time when most people are running after avarice, the world is fortunate to have a few generous and kind-hearted academicians and scribes, who wanted to help the community and give their best service to the society for no personal gains.

It did not take long for C Lawmzuala, a professional assistant at Mizoram University’s central library and Lallaisangzuali, a deputy librarian at the central library to realise the need for and take up the challenge of installing the non-profit mini roadside library in Aizawl after their official trip to the US in 2016 and
2017.

The dream of setting up the like of the US’s mini roadside libraries has haunted the two ever since they came across it in Ohio and other parts of the US.

They turned their dreams into reality in a year and the chain reaction was very positive as at least 2 more mini roadside libraries have come up in the city a year later.

The response from the public especially students motivated a college authority to set up three more mini-libraries for public use this year.

Lawmzuala and Lallaisangzuali have installed two mini roadside libraries, which they call as Little Free Libraries.

One library is installed at Aizawl market place and the other at Mizoram University campus in 2017, which was a replica of the US’s Little Free Library.

They were the first to start the project in Mizoram.

“After we came across the Little Free Library during our trip to the US in 2016 and 2017, we thought of installing the same in Aizawl,” Lawmzuala told NorthEast Now.

“Initially we were sceptical and nervous at the thought of the project inapplicable to the Mizo society. But later we decided to give it a try,” Lawmzuala added.

He said that they installed the two mini roadside libraries with an initial donation of 20 books each and with the sole objective to inculcate the habit of reading in people.

“Our purpose was to promote reading habit among youngsters, especially the students and test the credibility of the Mizo moral values,” he added.

“Beyond our expectation, the libraries received good response winning hearts of netizens and in some way, they become an epitome of the Mizo moral ethic of generosity and honesty,” he added.

The tiny roadside libraries are a unique concept of spreading wisdom where people read and take a book for free.

They have no security to keep a check on them but the simple rule that reads “Take a book, Leave a book.”

People not only read and take the book but also donate it.

“I am fully aware that the Mizo society is a well regimented, disciplined and honest society. I am confident that the free little library will work among the Mizos,” said Lalhruaitluanga Chawngte.

He himself had who set up his own non-profit mini roadside libraries near his residence at Aizawl’s Mission Vengthlang.

Chawngte is a writer and journalist associated with the leading local vernacular paper “The Aizawl Post.”

He has authored at least two books and his book Aizawl ah Aizawller has won the Mizo Academy of Letter’s book of the year in 2016, which is the highest literary award in the state.

Chawngte installed Free Little Library attached to a wall on November 4, 2019, in memory of his late father Rev C Lianhmingthanga, who died in 2017.

“I want to contribute to society by promoting reading habit among my people. My father, as well as I, was book warmers,” he said.

“So I thought of installing mini roadside library so at least one or two can read it for free as I could not afford big libraries,” he added.

He said the mini-libraries received a positive response from the public and some of them have begun loving books after the installation.

Walking in the line of the US, an assistant profession and a librarian a state’s reputed college also installed Little Free Library in the college campus.

“Due to the strong response from the public especially students, we have planned to open three more mini-libraries for public use,” Lalthanmawii Sailo.

Sailo is an assistant librarian at Pachhunga University College (PUC).

He started the mini free library with H Laldinmawia at the college campus.

The mini library installed by Sailo and Laldinmawia, who is an assistant professor in the Mizo department, was opened by Champhai constituency MLA ZR Thiamsanga on November 15 last year.

Laldinmawia said that the MLA was impressed by the mini library and donated Rs 25,000 for new installations.

He said that the mini free library was started with books donated by generous people.