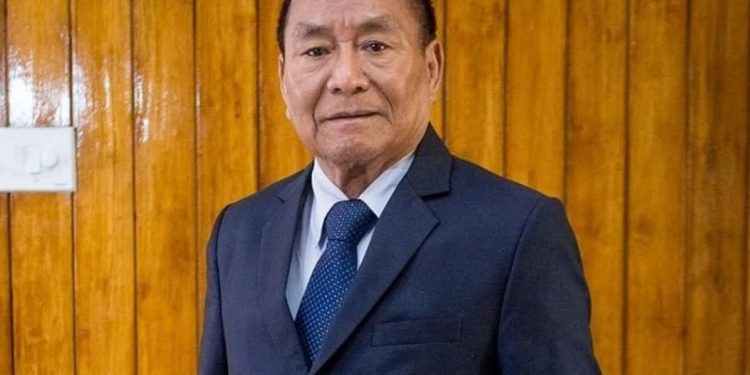 Family sources said the leader was suffering from stroke and pneumonia since October last year.

He was admitted at Aizawl Civil Hospital in mid-October and later referred to GNRC in Guwahati in November last year, sources said.

After being given intense medical care at Intensive Care Unit in GNRC, he was flown back to Aizawl and admitted at the civil hospital in February this year.

The veteran leader died around 7:30 am on Wednesday.

He is survived by his wife and two children.

Born on August 23, 1937 at Chapi village in south Mizoram’s Siaha district, Hiphei, who is also called ‘father of the Mara tribe’ started his political career with Mara Freedom Party (MFP) in September 1963.

Later, he elected first vice president of the party.

Eariler, he had served as middle school headmaster at Tôkalô and Chakhei village in Siaha for several years.

He got married to Sathlie in 1961 and had five children (3 sons and 2 daughters).

His three sons had already passed away.

Hiphei was elected to the state Assembly from Tuipang constituency (Now Palak) as independent in 1972 when Mizoram was a union territory and was made deputy Speaker.

He won the state Assembly elections seven times between 1972 and 2013 from Palak.

He joined Janata Party in 1978 and later switched over to Congress camp in 1984.

The veteran politician was elected to Rajya Sabha for two consecutive terms between 1990 and 2002.

Before the state Assembly polls in November 2018, Hiphei resigned from his post, quit Congress and joined the BJP.

He contested from Palak constituency on BJP ticket but lost to Congress nominee K T Rokhaw in the 2018 Assembly polls.

His body was sent to his home town Siaha from Mara house in Aizawl for funeral.

He will be buried on Thursday, family sources said.

“I am saddened to learn about the demise of Hiphei. During his long and illustrious years of public service, including his stints as Rajya Sabha member, he was a constant beacon that people could depend upon even in times of darkness. A champion of value-based politics, he was a classic example of a person with a difference- an ideal public worker. His life is an inspiration bestowed upon the people of Mizoram, and he stood for the cause of the Nation as well,” Pillai said.

While conveying condolence to the bereaved family, Zoramthanga said Hiphei was a tall leader who has a long political career.

“Condolences on the demise of a senior BJP leader and former Speaker of Mizoram Assembly Mr. Hiphei. He was a 2-term Rajya Sabha MP also. Hiphei joined BJP in 2018 and contested for Assembly,” Madhav tweeted.