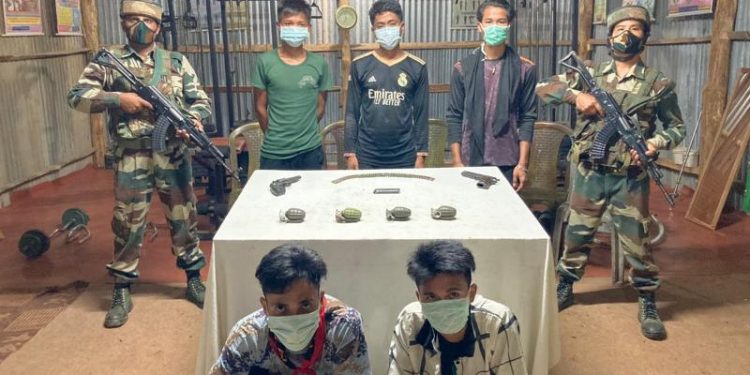 Five cadres of Myanmar-based rebel outfit, Arakan Liberation Party (ALP) were apprehended with arms and ammunition in a joint operation by Assam Rifles and Mizoram police from a border village in southern Lawngtlai district on Saturday, an Assam Rifles official said.

He said that the joint operation was carried out near Kakichhuah village in Lawngtlai district near the Indo-Myanmar international border on the Indian side based on specific information.

One each of 9 mm. pistol and 9 mm revolver,  55 rounds of bullets and five hand grenades were recovered from the possession of the APL cadres, he said.

There have been previous inputs of ALP cadres establishing medical camps in nearby villages of Kakichhuah and distributing COVID-19 essential items to the locals as part of their propaganda.

However, it has come to light that the medical camp was just a temporary base for their larger intent, he said.

Some of the ALP cadres were indulging in extortion by promising Rakhine Nationalism exploiting their fear for ALP and Arakan Army (AA).

“It has also come to light that they have demanded about Rs 3 lakh from the village head. Realizing the intensity of the situation, the local sources in the village informed about the same to Assam Rifles,” the official said.

Real-time information, swift and bold action of the security forces resulted in the apprehension of the five cadres, who were hiding on the outskirts of Kakichhuah village, he said.

The accused were later handed over to Lawngtlai police station, he added.

Meanwhile, a police officer said that the five ALP activists were produced to Lawngtlai district court on Saturday with charges lodged in different sections under the Arms Act and Foreigners Act.

The district court ordered them for jail remand for further interrogation by police.