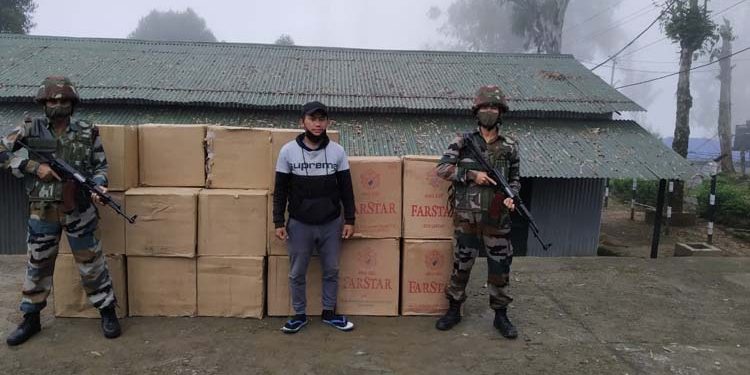 A view of the seized consignment.

As part of their continued crusade against smuggling activities, the Assam Rifles troops deployed in Mizoram seized 22 cases of foreign origin cigarettes at Champhai  in Mizoram.

The operation was carried out on Saturday by the Serchhip Battalion of 23 Sector Assam Rifles under the aegis of HQ Inspector General Assam Rifles (East).

The operation was carried out by a joint team of Assam Rifles based on specific information, the HQ IGAR (East) said in a statement.

The approximate market value of the seized foreign origin cigarettes is Rs.28,60,000.

The recovered items were handed over to the Customs Preventive Force, Champhai

Along with the illegal goods, the Assam Rifles team also detained one individual.

The ongoing smuggling of drugs is a major cause of concern for Mizoram, especially along the India-Myanmar border.

Assam Rifles, rightly christened as the ‘Sentinels of Northeast’, has continued their efforts against the smuggling activities in Mizoram.

Earlier on July 14, 2021, the Serchhip Battalion of 23 Sector Assam Rifles seized 12 cases of foreign origin cigarettes in Chhungte of Mizoram.

Based on a specific information, a team of Assam Rifles along with Customs Preventive Force Champhai carried out the joint operation.

The estimated cost of the seized cigarettes was around Rs 15,60,000.

The customs preventive force detained one individual in connection with the seizure apart from seizing the illegal goods.