Hundreds of anti-CAA protestors on Tuesday waved black flags at Mizoram MP C. Lalrosanga as he arrived at Lengpui Airport at Aizawl.

The anti-Citizenship Amendment Act (CAA) protestors staged a demonstration in the afternoon at the airport under the aegis of Mizoram’s apex students’ organization Mizo Zirlai Pawl (MZP).

Mizoram’s lone Lok Sabha MP Lalrosanga has come under severe attack from the students’ body and opposition parties for allegedly voting in favour of the Citizenship Amendment Bill (CAB) in the Parliament in December last year.

The CAB became an Act after President Ram Nath gave his assent to the Act on December 12, 2019.

The protest was led by Mizo Zirlai Pawl president B. Vanlaltana.

The protestors carried black flags, anti-CCA posters and wore the Mizo traditional shawl, ‘Pawndum’, to express their anger and disapproval against the MP for supporting the new law.

Apart from seeking an apology from Mizoram MP Lalrosanga, the protesters also demanded the MP to resign from his post for his alleged “faulty practice” and for acting against the interests of the people of Mizoram.

Addressing a function at the protest site, B. Vanlaltana said the new law is harmful to Mizoram, which has been facing illegal influx from Bangladesh for decades.

He said the MZP has been opposing the law since it was a bill and will continue to oppose it until it is scrapped.

On their future course of action, Vanlaltana said they will act in accordance with the North East Students’ Organisation (NESO).

The MZP president denied that the protest was politically motivated.

“There is no political interest behind the protests against CAA. The MZP does not support or oppose any political party,” said Vanlaltana.

“We are just opposing the law as it is harmful for our religion and culture,” he said adding that the MZP was fighting for the cause of the Mizo people.

NESO finance secretary and MZP leader Ricky Lalbiakmawia also said Mizoram is still vulnerable to illegal influx although it has been exempted from the purview of the amended citizenship law. 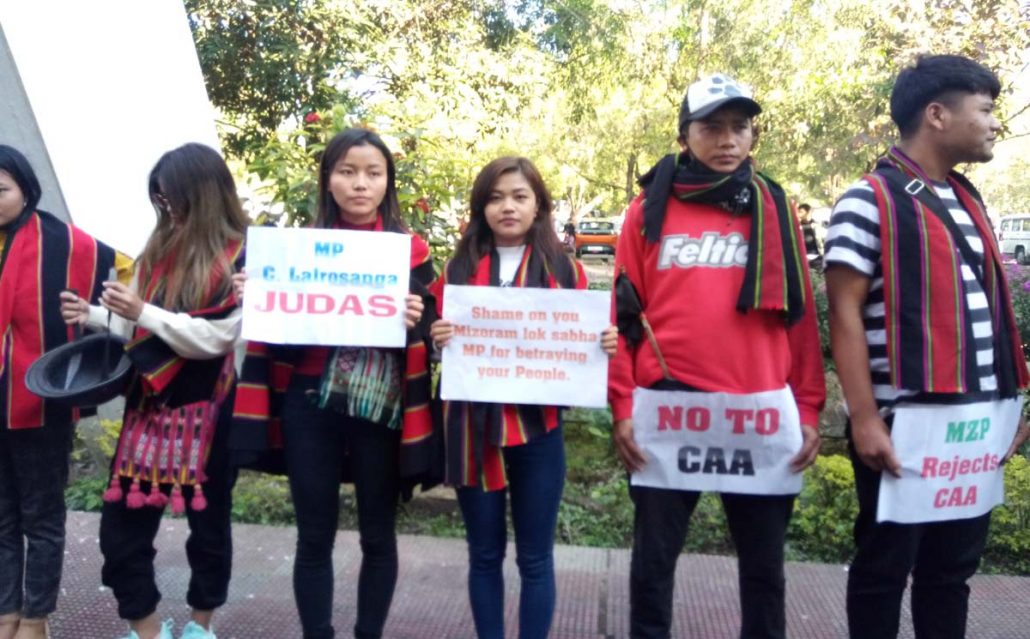 Mizoram has been facing the influx of illegal immigrants belonging to Buddhist Chakmas from neighbouring Bangladesh for many decades.

“The Chakma tribals will migrate from Bangladesh to other Indian states and later come to Mizoram if the citizenship law is not scrapped or the entire Northeast is exempted from its purview,” he said.

He added that black flags would be displayed across the state on Thursday to protest the law.

Mizoram MP Lalrosanga arrived in the Lengpui Airport where he was accorded a warm welcome by party leaders.

The MP was immediately taken to his residence in Aizawl under tight security.

Lalrosanga, who successfully got elected to the Lok Sabha on a Mizo National Front s ticket in April last year, had voted in favour of the CAB.

He had claimed that he was doing right in voting the bill as the Centre had exempted Mizoram from the purview of the law.