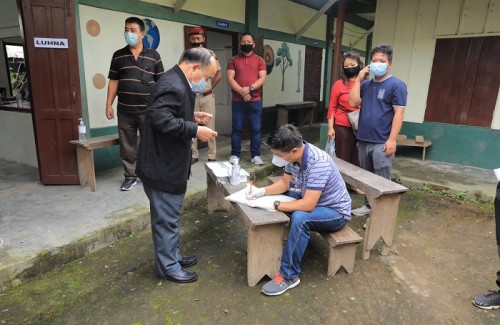 Amid the Covid-19 pandemic, the elections to over 500 village councils and more than 70 urban local body councils in Mizoram were held on Thursday.

Opposition parties had sought postponement of the polls fearing the further spread of the disease.

State Election Commission (EC) officials said that social distancing protocols are being maintained as voters turned up to exercise their franchise.

Voting began at 7 a.m. and ended at 5 p.m. The votes will be counted on Friday.

“Polling was held in a peaceful manner and orderly atmosphere. No untoward incident was reported from anywhere in the state till late afternoon,” an EC official said.

In the polling centres, elderly male and female voters were seen standing in queues in the morning to cast their votes.

According to officials, 4, 54,180 people are eligible to cast votes in 558 village councils across the state and 2, 18,758 in 83 local councils under Aizawl Municipal Corporation.

In all, 8,491 candidates including 2,102 women are contesting the local bodies’ polls.

The state poll panel postponed polling in 24 local councils to contain the spread of Covid-19.