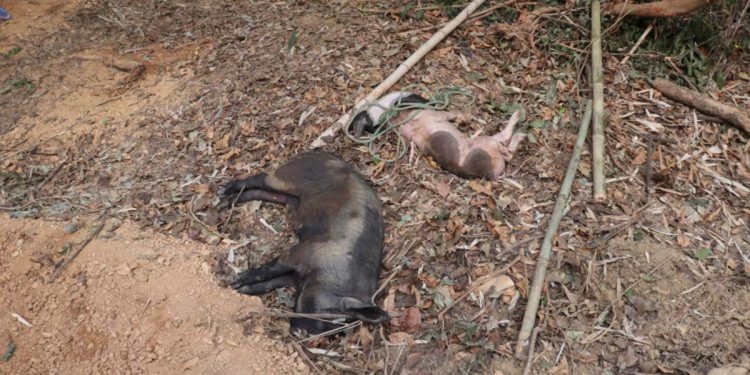 African Swine Fever (ASF) continues to wreak havoc in Mizoram as 10 out of 11 districts have been affected by the swine fever, killing over 9,000 pigs in over 3 months, said the state’s animal husbandry and veterinary science department.

According to data, released by the department on Sunday, at least 152 villages or local areas in 10 districts are currently affected by ASF, which has claimed a total of 9,172 pigs since March. causing monetary losses to the tune of over Rs. 36.68 crore.

Besides, unusual death of 699 pigs was reported outside the ASF-infected areas, according to the data, shared by the animal husbandry and veterinary science department.

Though the cause of the pigs’ death is suspected to be ASF, it is yet to be confirmed, the department said.

The official data said a total of 1,078 pigs have been culled so far to prevent the disease from spreading further.

The first pig death due to unknown disease was reported at Lungsen village in south Mizoram’s Lunglei district bordering Bangladesh on March 21.

After testing negative for Porcine Reproductive and Respiratory Syndrome (PRRS) and Classical Swine Flu (CSF), the pig samples were sent to the National Institute of High Security Animal Disease (NIHSAD) in Bhopal, which confirmed the cause of pig deaths as ASF on April 16.

Though the spread of ASF in Lunglei district became less severe, it began to ravage Aizawl district, which borne the brunt of the pig disease with 3,454 pig deaths so far, according to the department joint director (livestock health) Dr. Lalhmingthanga.

Only Kolasib, which shares border with Assam, is currently ASF free district in the state, he said.

Lalhmingthanga said that a special diseases investigation team, which visited Lungsen village during April 5-8 found that pigs are illegally imported from Bangladesh through villages like Tipperaghat and Khojoysury located near the Bangladesh border.

Illegal pig traders use Lungsen village as a stock point for keeping the animals before moving them to Lunglei market, he said.

He said the president of Rolui village council informed that the outbreak of an unknown disease killed several pigs in Bangladesh villages along the Indo-Bangla border in February 2021.

Lalhmingthanga further said the ASF outbreak in Aizawl district and east Mizoram’s Champhai district is believed to be caused by pigs or pork transported from Meghalaya and Myanmar respectively.

He added that the state government would request the Centre to provide compensations to the culled pigs.