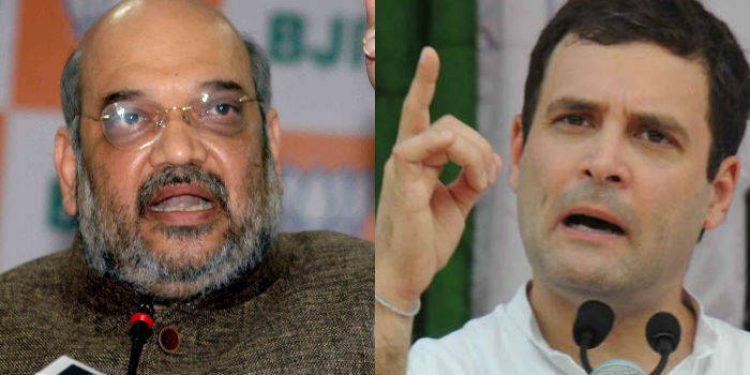 Mizoram is all set to witness a battle royale later on Tuesday even as Congress president Rahul Gandhi and Bharatiya Janata Party (BJP) national president Amit Shah are visiting the poll-bound north-eastern state.

Both the party presidents will address election rallies on Tuesday for the ensuing November 28 Assembly elections.

Rahul will be arriving by a special flight and address rallies in Aizawl and south Mizoram’s Champhai town bordering Myanmar.

The Congress president will first address a rally at Champhai, around 183 km from capital Aizawl where incumbent Chief Minister Lal Thanhawla is contesting and later he will address another rally at the third Mizoram Armed Police ground at Maulpui in Aizawl later in the afternoon.

The Congress president was scheduled to address a rally earlier on October 5 last, the Assam Rifles has denied permission to use their ground on the pretext that the ground was meant for sports activities only.

However, Congress party sources in Mizoram said that the denial from Assam Rifles was prompted because of intervention from the Union Home Ministry.

State Congress spokesperson, Lallianchhunga on Monday questioned then why the Assam Rifles ground was given for Prime Minister Narendra Modi’s rally scheduled for November 22.

On the other hand, BJP national president Amit Shah will be arriving at the Lengpui airport near Aizawl and visit Lawngtlai in southernmost Mizoram, Champhai which is close to Myanmar border and Vairengte that shares inter-state boundary with Assam by helicopter where he would address public rallies.

Later, Shah will arrive in Aizawl from Vairengte and release the BJP’s vision document for the State before leaving for New Delhi.

Meanwhile, security has been beefed up for the two high profile visits on Tuesday.

Prime Minister Narendra Modi is visiting the State on Friday next.