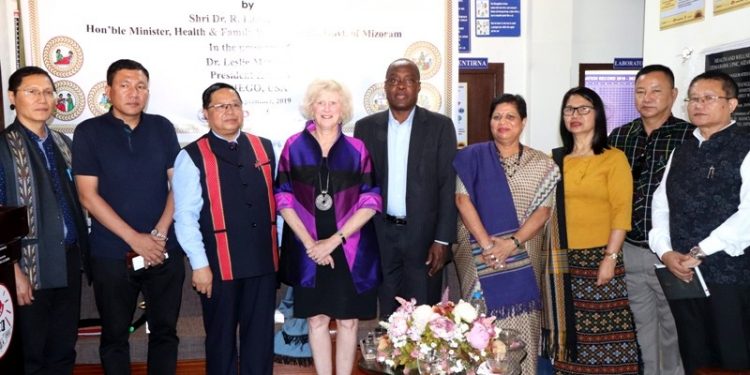 Mizoram health and family welfare minister Dr R Lalthangliana, on Wednesday inaugurated the Health & Wellness Centre at Zembawk which was upgraded from an urban primary health centre to the current status.

The inauguration was also attended by the president and CEO Dr Leslie Mancuso of Jhpiego, an NGO affiliated to the prestigious Johns Hopkins University, Baltimore, USA.

Jhpiego with funding from USAID is partnering with Ayushman Bharat in improving healthcare in the country.

Dr R Lalthangliana highlighted the achievements of Mizoram in the healthcare sector and pointed at the reduction of IMR from 37 in 2010 to 15 in 2019 and the first position of Mizoram among small states in the latest health index released by NITI Aayog.

He said Mizoram has scored 74.97, which is higher than that of Kerela which ranked first among big states with a score of 74.01.

He remarked that to further improve the critical healthcare indices, the Department has set Destination Targets to be achieved in the next two to three years.

The targets are: bringing down IMR to under 10 in the next two to three years; bringing down MMR to below 50; achieving 90 percent registration of all pregnancies (first trimester) in the Sub Centres and achieving 100 percent immunization for all children, he added.

Dr Leslie Mancuso, president & CEO, Jhpiego remarked that her NGO was proud to be associated with the world largest public healthcare programme – Ayushman Bharat and she said she hoped that Mizoram will be a model state in achieving universal health care and coverage.

She expressed happiness that Jhpiego has had almost 4 decades of partnership with the Indian government in the healthcare sector.

Under Ayushman Bharat, all sub centres, primary centres, urban primary health centres in the state are to be upgraded to Health & Wellness Centres by 2022.

These Centres aim to provide affordable and comprehensive healthcare services to citizens as close to their doorsteps as possible.