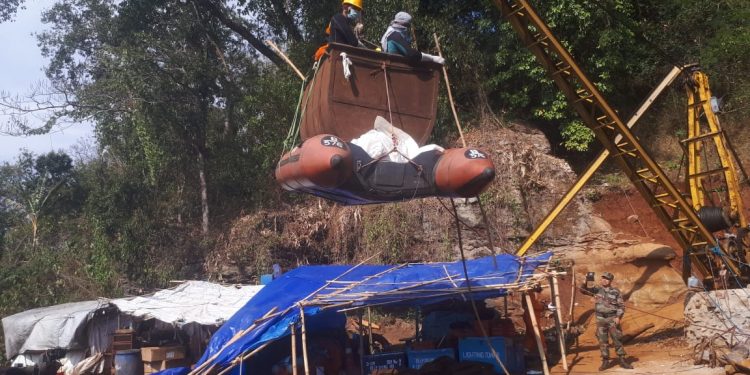 Body of a trapped miner being retrieved from a the coal pit in Meghalaya.

Meghalaya chief minister Conrad K. Sangma on Tuesday said his government would appeal to the Supreme Court to call off the ongoing rescue operation to retrieve bodies of the the remaining 13 coal miners who have been trapped inside a coal mine at Khloo Ryngksan in East Jaiñtia Hills district.

It has been 125 days now since the miners were trapped on December 13 last year.

The incident took place at a time when the ban on rat-hole coal mining in Meghalaya by the National Green Tribunal (NGT) is still in place since April 17, 2014.

Out of 15 trapped miners, divers of the Indian Navy have managed to retrieve two bodies so far.

The Navy has detected three more bodies by using the Underwater Remote Operated Vehicle, but till date, the bodies have not been taken out.

“We are still trying but it looks very difficult and we will approach and see if Supreme Court allows us … to discontinue with the operations. Right now, since the matter is in court, it will be inappropriate for me to make any comment,” Sangma said on Tuesday.

But he informed that the state government would appeal the Supreme Court to allow to call off the rescue operation.

“We have been maintaining that this operation is very difficult. Even in the first few days after the incident had happened, we have shared that it looks like a difficult operation but nonetheless, the government continued to work and agencies from across the country came in and helped us, but we did not get the desired results,” the Chief Minister said.

Sangma said that based on the Supreme Court orders, the rescue operation has been continuing, but without fruitful results.