Meghalaya: Coal India to pump out water from mine pit in last ditch effort

In a last ditch effort, the Coal India Limited will start pumping out water from the coal mine at Khloo Ryngksan in East Jaiñtia Hills district of Meghalaya on Thursday.

The East Jaiñtia Hills district public relations officer, R Susngi disclosed on Wednesday that the Coal India has brought its submersible pumps with 100 HP each that can discharge 500 gallon per minute.

Earlier, the Coal India Limited has decided to bring eight pumps to the site, according to Shillong Today. 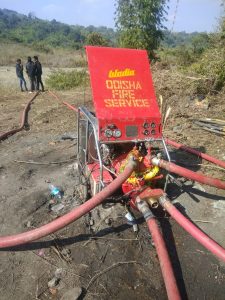 Meanwhile, the Fire Services from Odisha has already brought 10 high powered pumps to the site and have pumped out considerable amount of water from a nearby shaft close to the mine where 15 miners are trapped since December 13 last year.

Meanwhile, commandant of the 1st Battalion of NDRF, S K Shastri along with other officers visited the incident site on Wednesday and interacted with senior officials of the district administration and all agencies involved in the rescue operation.

The rescue operation gained momentum on December 30 last year, when the NDRF and Indian Navy personnel began their operation to locate the 15 miners who have been trapped inside the mine pit.

The divers from the Indian Navy dived 70 feet down but could not locate the trapped miners due to high water level and poor visibility.

On December 31, during their second attempt, the divers of the Indian Navy found some wooden structure and coal inside the coal pit after they stayed inside the mine for three hours, but there were no traces of the trapped miners.