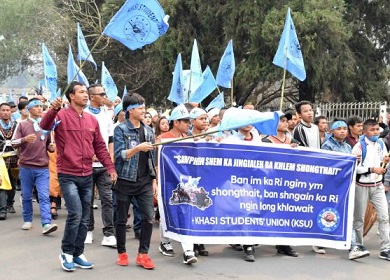 A rally was taken out by the influential students’ body of the Khasi Hills of Meghalaya to mark the occasion that started from its office in Jaiaw and culminated at Lachumiere from where the activists headed to the U SoSo Tham auditorium where a programme was scheduled.

Trouble erupted at that moment along GS Road when some KSU volunteers holding the union’s flag started thrashing up non-tribals walking on the footpath with the flag sticks.

Traffic came to a grinding halt even as KSU volunteers also pelted stones at shops and other business establishments that surprisingly kept their shutters down.

Several shops were damaged in the vandalism created by the students along the way. A sumo vehicle parked on roadside was also damaged.

Questions are raised over the passive role of the security personnel deployed to maintain peace during the rally.

Meanwhile, the police played it safe stating that investigation is on to probe whether the KSU volunteers were involved in the violence or was it a handiwork of some miscreants.

Ironically, no FIR has been filed on the incident.

Meanwhile, the district administration has already submitted a report on the incident to Chief Secretary Y Tsering.