Social activist Agnes Kharshiing lodged an FIR with the CBI seeking probe into reported running of a multi-crore business and syndicate by ‘implant mafia’ in NEIGRIHMS.

Meghalaya’s human rights activist Kharshiing lodged the FIR with the SP, CBI in Shillong on the basis of a media report published on Tuesday.

The report quoted NEIGRIHMS director Devendra Mohan Thappa as saying: “I fear that there is a threat to my life for repetitively mentioning about the illegal business which is allegedly being run by an implant mafia belonging to the cardiology department.”

Dr Thappa made the allegation a few days after the Governing Council of NEIGRIHMS decided to remove him as the director of the institute.

The decision has been taken to resolve the present crisis in NEIGRIHMS due to stand-off between the faculty of Cardiology department and the administration.

A tussle has continued between the Cardiology department head, Dr Animesh Mishra and Dr Thappa since long.

Referring to the report that “a syndicate between the Cardiology Department Head and the proprietor of Sanju Pharmacy” has been “going for years”, Kharshiing said “this is serious”.

In the FIR she said the allegation “has to be investigated so that the truth comes out as this is dangerous”. 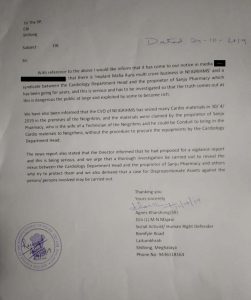 The public has been “exploited by some to become rich”, she alleged.

Kharshiing said she has been informed about seizure of many “cardio materials” of NEIGRIHMS by the CVO (chief vigilance officer) of the institute on April 30, 2019.

The materials were claimed by the proprietor of Sanju Pharmacy, who is the wife of a technician of the NEIGRIHMS, she said.

The technician could be “conduit to bring in the cardio materials to NEIGRIHMS, without the procedure to procure the equipments by the Cardiology Department head”, she claimed.

Kharshiing urged the CBI to conduct a thorough investigation to reveal the “nexus between the Cardiology Department head and the proprietor of Sanju Pharmacy and others who try to protect them”.

She also demanded that a probe be carried out into “disproportionate assets” against the person/ persons involved in it.