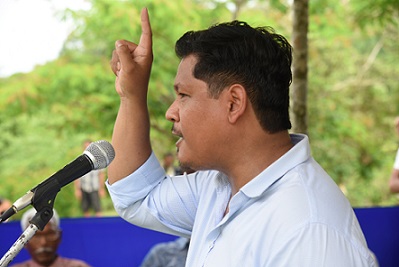 Revenue Minister Kyrmen Shylla on Tuesday send a loud and clear message to the people of Ampati constituency that the coalition with NPP, United Democratic Party (UDP) and other partners will last full term.

“Don’t dare to even think of breaking our relationship with NPP and others. We will stand together and ensure progress and prosperity for Meghalaya”, said Shylla addressing election rallies at Murchapani and Garabokmangre under Ampati constituency.

Shylla said that under the leadership of Conrad K. Sangma the people of Meghalaya has renewed their hope and aspirations and are looking forward that he will bring about positive change and development in the State.

“Meghalaya Democratic Alliance will stand united and together. All the regional parties have full support and faith in the leadership of Conrad K. Sangma. I assure that this relationship of the coalition will not just last five years but beyond,” asserted Shylla.

He said at the rallies that the people of Ampati were lucky to have a candidate like Clement G. Momin, who will be part of the new Government.

“The agenda of our Government is to create a new Meghalaya and why should the people of Ampati be left behind,” Shylla added.

For the past one week, NPP and its partners are camping in Ampati constituency to woo the voters to unite with NPP and break the Congress in Ampati, a stronghold of Mukul Sangma.

“The by-election is very important for NPP as this will demonstrate that Ampati is ready to embrace change and are willing to be in the ruling side, a Government that promises to ensure overall growth and development,” said Conrad K. Sangma.

Chief Minister Sangma said that the era of Mukul Sangma and the Congress party is over not just in Meghalaya but elsewhere.

“He (Mukul) is lying to the people that post by-election Congress will form the Government. How is it possible when all the regional forces are part of the MDA Government and are united?”

Urging the people to vote for NPP, Conrad K. Sangma said, “The situation during general election was different. Today, NPP is leading the MDA Government and there should not be no doubt and confusion whom to vote. Be part of NPP and strengthen the party and receive the full benefits of development.”