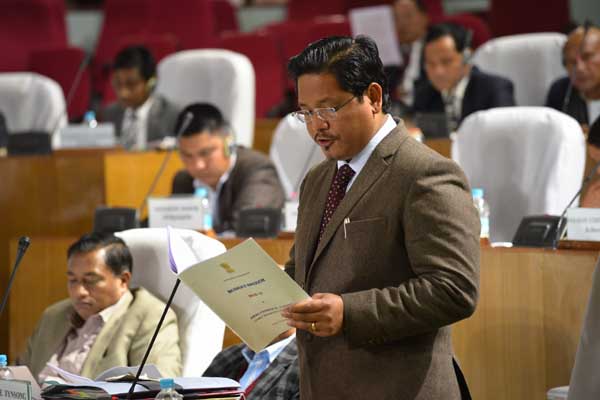 Chief Minister Conrad K Sangma presented a deficit budget of Rs 1,150 crore for the fiscal year 2018-2019, which is around 3.32 per cent of the GSDP, during the Assembly budget session on Friday.

“The estimated total expenditure is Rs 13,704 crore,” CM Conrad said while adding that the interest repayment during 2018-2019 is estimated at Rs 653 crore and pension payment at Rs 784 crore.

Meanwhile, he informed that during the year 2016-2017, the Gross State Domestic Product (GSDP) at current market price was Rs 28,445 crore, as per the quick estimates, which shows an increase of 9.5 per cent over the previous years.

Sangma said that there is a scope for better collection in the coming years, in view of the major shift to the new tax regime of Goods and Services Tax.

He said the areas which need more focus and improvement will be identified and remedial steps will be taken. The Finance Minister also said more stress will be given on scrutiny and assessment of returns of dealers under relevant Acts which have not been subsumed under the new regime in order to unlock revenue held up due to pending proceedings, reports TNT.

Meghalaya has been hailed as one of the best in the implementation of the MGNREGA especially in the creation of sustainable and durable assets, said Chief Minister and Finance Minister Conrad K. Sangma while presenting the Budget.

He has proposed a development outlay of 1457.94 crore rupees in the community and rural development sector for the coming fiscal. Conrad Sangma said the programmes such as Pradhan Mantri Awaas Yojana- Gramin, Deen Dayal Upadhaya Gramin Kaushal Yojana of the Ministry of Tribal Affairs and state sector schemes like Special Rural Works Programme and chief minister’s special rural development fund and community development schemes will continue to be implemented during the year for uplifting the living standard of rural people.