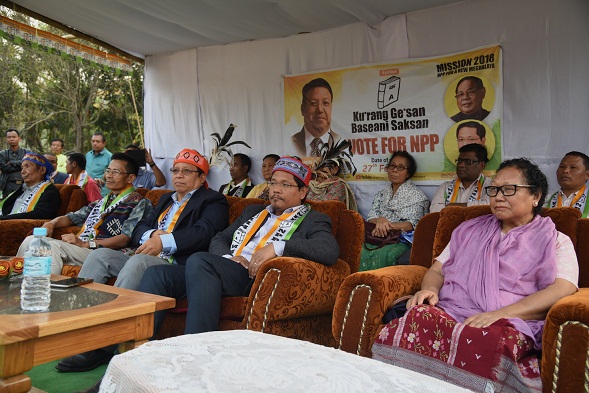 In the last leg of the chopper campaign, Conrad rallied behind Rakkam Sangma and urged the people not to be misguided by false propaganda and claims of the opponent, who will promise them moon but disappear after elections.

Deputy Chief Minister of Manipur Yumnam Joykumar Singh will campaign for NPP candidates on Saturday along with Conrad K Sangma.

He reminded the electorates of the grim reality of underdevelopment in South Garo Hills and promised to provide thrust on improving road and telecommunication in the district, including Siju-Rongara, which has vast tourism potentials.

“Siju has fame in global tourism map for its cave. If adequate infrastructure is developed with basic amenities, it can boost the local economy and enable the stakeholders to partner with the government for sustainable and economic empowerment of the people”, he said, while listing priority that road and telecommunication would be one of the core areas for accelerating growth in the region.

“The wave of NPP is felt strongly. People have come together from all regions to support NPP. Let us pledge that together we will be able to realise the dreams of our late leader Purno Sangma”, Conrad said, while urging the voters to vote for NPP.

“There is no accountability of schemes and programmes being implemented by the current Congress government. The government has not been able to provide equitable development. There is economic disparity and Mukul Sangma has failed to ensure growth and process in Meghalaya. If they are allowed to form the next government, Meghalaya will be left behind and we will not be able to catch up with other states”, he said at an election rally at Milliem, where he sought people’s support for Phillipole D Marak.

At Eden Bari, Conrad termed North Tura candidate Thomas Sangma as the most able and suitable leader of Meghalaya. He said that Thomas Sangma, who has an experience as member of the Rajya Sabha will be an added bonus for the electorates of North Tura constituency and push the agenda of the party and ensure development in every nook and corner of the constituency.