Due to the financial crisis in Meghalaya several welfare schemes have been discontinued or are defunct: Richard M marak 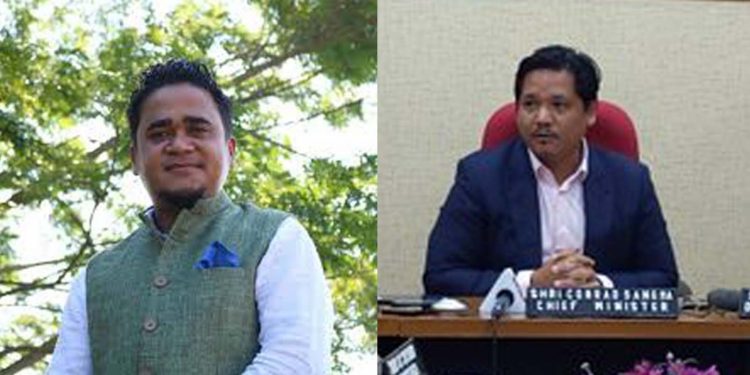 Informing about his meeting with Thakur, the CM had tweeted: “Held meeting with Hon’ble MOS @FinMinIndia @ianuragthakur ji in Delhi and apprised him on financial position of the State and measures taken to increase revenue.”

Held meeting with Hon’ble MOS @FinMinIndia @ianuragthakur ji in Delhi and apprised him on financial position of the State and measures taken to increase revenue. pic.twitter.com/ao7BGVMeCB

During his recent visit to the national capital, Conrad also met union home minister Amit Shah with whom he had discussions on the Citizenship Amendment Bill, Sixth Schedule, Punjabi lane issue & other important issues.

Questioning Conrad’s meeting with the junior union finance minister, Richard said, “Why did the Chief Minister meet the junior finance minister for the fund crunch that the state is facing when he has already met the PM and the HM?”

According to Richard, chief minister Conrad is “unaware” about the protocol and had no need to meet a junior union minister.

“Is he unaware of the protocol that he has to go and meet a junior MOS when it could be done with a single phone call or if he could have sent one of his ministers instead?,” the Meghalaya Youth Congress chief questioned.

Richard has also criticized Conrad, who shares pictures of meeting people on the social media.

“The only reason that we can see is that it looks like he is working when he uploads a photo on social media of him meeting people and gallivanting around the world,” said Richard.

The Youth Congress leader alleged that the “ground reality is grim” and the government is “not taking” any of the “issues seriously”.

He also alleged that the chief minister has been giving “misinformation to the people”.

The mandate of the people was for a new Meghalaya.

“Let’s see what we are seeing in this new Meghalaya of the present government, the major one of which is the financial crisis in the state,” said Richard.

He claimed that due to the financial crisis in Meghalaya “several welfare schemes have been discontinued or are defunct”.

“Salaries for government employees for the coming months are also uncertain,” he claimed.

He also alleged that wages of muster-roll workers, ASHA workers, teachers and GHADC employees “have not been paid”.

“Contractors of all departments are not being paid their pending bills. Even though it was announced in the media, there is no certainty that the 30% arrears will be released,” he alleged.

“Even emergency services have been hit. Development projects which have been already been sanctioned are not starting and others are stuck without any progress,” the Youth Congress leader stated.

He also said maintenance of amenities like roads and street lights are also non-existent.

“These are serious issues and will not be solved on social media,” he added.

He suggested that the CM take the advice of some economical expert and “not his PR manager”.

Richard also termed the MDA government as the “most corrupted (corrupt) and incompetent government”.