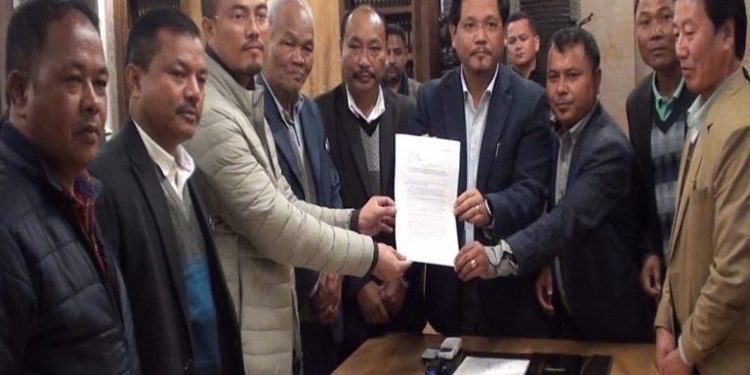 The UDA was of the view that there is a need to convene a special session of the KHADC to prove which side has the majority in the House.

A delegation of MDCs led by UDA chairman, Teiñwell Dkhar met the chief minister at his official residence and informed him that the alliance has the support of 16 MDCs.

The chief minister, however, asked the delegation to submit a letter on the matter to which they submitted the same to his office at the state secretariat in the evening.

After the meeting, Dkhar, who is also leader of the UDP, told the media that the delegation has requested the chief minister for his intervention on the need to immediately convene a special session of the KHADC.

He said that the alliance is ready to prove that it has the majority in the House of 29 in order to form the new executive committee.

Dkhar further informed that the chief minister has assured the delegation to take a decision on the matter within a week.

The UDA-led executive committee was toppled in November last year, after five members of the alliance voted in favour of the no-confidence motion moved by the opposition Congress.

Subsequently, Independent member from Nongthymmai Latiplang Kharkongor was elected as the new chief executive member with the support of the United Democratic Front (UDF) backed by the Congress.

However, the state government is yet to notify the election of Latiplang as the CEM even as the list of executive members submitted by him has not been approved by the Governor.

The strength of the UDA has increased to 16 following the decision of Congress MDC from Mairang-Nongkhlaw, Batskhem Ryntathiang and Independent MDC from Nongshken, Grace Mary Kharpuri to shift allegiance to the alliance.

In view of this, the UDF was subsequently reduced to 13 including the chairman of the Council, P N Syiem.