Meghalaya: Soil, water from Jaiñtia Hills taken to UP for building Ram Temple at Ayodhya 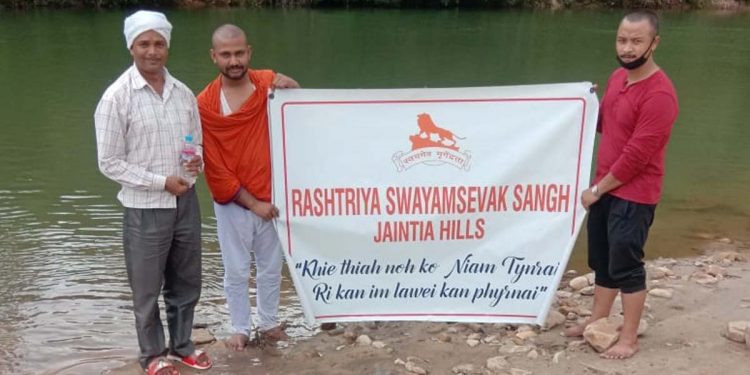 Soil and water from Meghalaya’s Jaiñtia Hills will be part of the historic building of Ram Temple at Ayodhya in Uttar Pradesh.

Prime Minister Narendra Modi is scheduled to lay the foundation stone for the Ram Temple at Ayodhya on August 5.

The water was collected from two rivers – Myntdu and Myntang, and soil from Syntu Ksiar, Jowai and Nartiang.

A 600-year-old Durga Temple is located at Nartiang in the West Jaiñtia Hills district of Meghalaya.

A section of tribals in Jaiñtia Hills of Meghalaya, who are followers of Hinduism, believe that this temple is the permanent abode of Goddess Durga.

The temple draws a large number of pilgrims from all over the country on occasion of Durga Puja.

Speaking to Northeast Now, Rashtriya Swayamsevak Sangh (RSS) leader Gaurav Tiwari, who is the Pracharak for Jaiñtia Hills, said soil and water from Jaintia Hills are significant given the fact that Pnar people believe in Ram and Lakhan (Lakshman).

“Parents who gave birth to male twins, also accord the names as Ram and Lakhan,” Tiwari said.

According to Tiwari, half litre water was taken from Myntdu and Myntang, half kg soil was collected from Syntu Ksiar, Jowai and Nartiang.

Myntdu River is one of the major water bodies in West Jaintia Hills district, locally known as ‘ka Tawiar ka Takan’ (Our Guardian Angel) in the Pnar dialect.

“We collected the soil and water on Sunday, and the elements have been sent to Uttar Pradesh,” Tiwari said.

Urging everyone to take part in the building of Ram Temple, Tiwari said, “Some Christians also want to help in the construction of the Ram Mandir at Ayodhya. Some church leaders even want to visit Ayodhya. Therefore, the construction is not on religious lines.”

Tiwari informed that water and soil from all sections of India, besides Afghanistan, Indonesia, Tibet are being collected for building the grand and divine Ram Temple.

A century-long dispute over the site was resolved in November last year, as the Supreme Court ruled in favour of the temple trust, saying that Muslim petitioners would be given five acres at an alternative site.