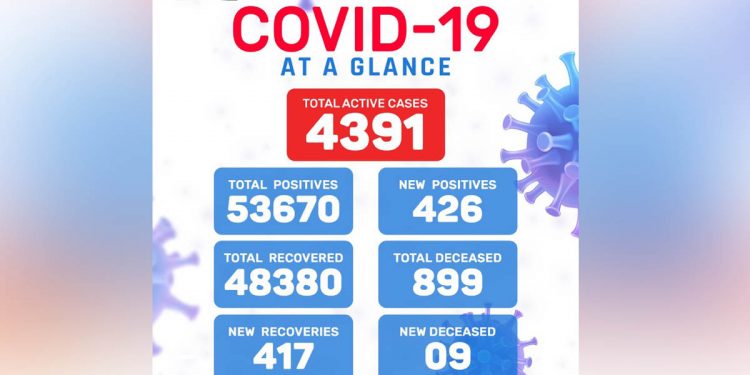 According to the latest Covid19 bulletin, released by the National Health Mission (NHM) Meghalaya, with the new cases, the total Covid19 positive tally increased to 53,670 in the state on Friday.

A total of 899 people have lost their lives due to the Covid19 infection in Meghalaya so far.

According to the NHM Meghalaya data, a total of 417 patients, who were earlier infected by Covid19, recovered from the disease on Friday.

So far, a total of 48,380 patients have recovered from the disease in Meghalaya.

Meghalaya currently has a total of 4,391 active cases. 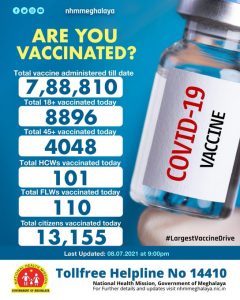 The state registered a total of 432 new Covid19 positive cases on Thursday.

On Thursday, a total of 366 people recovered from the disease.

According to NHM Meghalaya data shared on Thursday night, so far, a total of 7,88,810 people have been administered Covid19 vaccines in Meghalaya.

According to the NHM Meghalaya data, on Thursday, a total of 13,155 people received Covid19 vaccine doses.

A total of 44,459 patients recovered in the last 24 hours, according to the Union health ministry.

Meanwhile, according to the District Task Force for COVID19 Vaccination in East Khasi Hills informed that
BDO Mylliem Block counselled 9 High Risk contacts at Mawkhan Pasir, who refused testing after coming into contact with a positive case.

With the efforts of BDOs, MOs, health care workers& CCMTs, awareness is imparted to dispel fear of testing, the taslk force tweeted.

Awareness meetings have been organised in villages to help sensitize the importance of Covid19 vaccine to the rural communities.

An awareness programme on Covid19 vaccine was organized with the BDO, headman, EC members and the medical officer at Mawmaram.