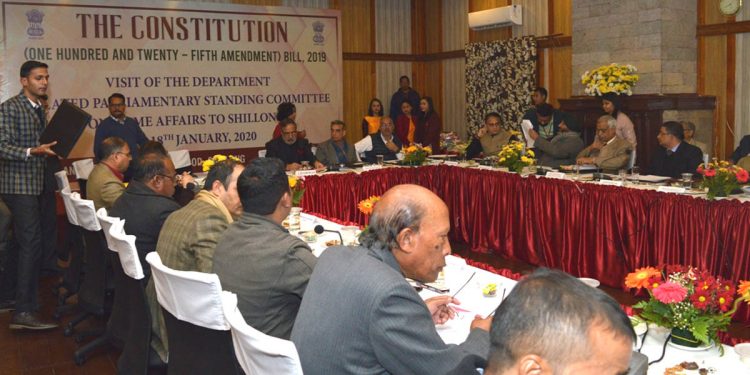 The Parliamentary Standing Committee on home affairs will complete its exercise and submit its report on the proposed amendment to the 6th Schedule to the Constitution to the Parliament by March.

The parliamentary committee on Saturday took views and opinions of various stakeholders including political parties in Meghalaya on issues related to the proposed amendment to the 6th Schedule.

The committee has been led by its chairman Anand Sharma, who is also the Congress MP in Rajya Sabha.

The committee interacted with representatives of various organisations including members of the autonomous district councils (ADCs) in the state on the Constitution (One Hundred and Twenty-Fifth Amendment) Bill, 2019 in a city hotel on Saturday evening.

“We came here to hear the stakeholders especially representatives of various tribal organisations and the autonomous district councils for their views on the Constitutional amendment which deals directly with the ADCs,” said Anand Sharma.

Terming the meeting as “good”, Sharma, however, refused to divulge what transpired during the interactions.

When asked about the completion of the exercise and submission of the report to Parliament, Sharma said that hopefully, the committee would complete by March this year.

Opposition leader in Assembly, Mukul Sangma who is also the Congress leader in Meghalaya, took part in the interactions but did not reveal issues raised by his party before the Parliamentary standing committee.

“The exercise or amendment of the proposed legislation which is before the parliamentary standing committee remains secret,” said Mukul Sangma.

“Everything we have articulated during the discussion remains confidential until this standing committee mandated with the responsibility, submits its report in Parliament,” he added.

The main issue concerning Meghalaya is the inclusion of the word “unrepresented tribe” in the proposed amendment of the Sixth Schedule in order to facilitate the nomination of members from among the sub-tribes in the two ADCs.

However, various stakeholders argued that many tribes included in the President’s Constitution Order 1950 are not indigenous to the State of Meghalaya.

Justifying that the word “unrepresented tribes” should not be included in the proposed Sixth Schedule amendment it was argued that sub-tribes in the state of Meghalaya have been contesting elections to the autonomous district councils as well as elections to the Meghalaya Assembly.

Some of them were also elected as a member of the autonomous district councils and state Assembly.

The issue related to increase the number of seats in the ADCs and the need to amend Para 12 A (b) of the 6th Schedule in order to return the power of application of acts of Parliament to the governor of the state from the President of India was also taken up with the standing committee.