The decision to expel Khasi Hills Autonomous District Council (KHADC) Syiem was taken by the NPP’s disciplinary committee during a meeting on Sunday.

Syiem had voted in favour of the ‘no confidence’ motion moved by the opposition Congress during the winter session of the KHADC on November 20.

Syiem cast his vote after both the ruling United Democratic Alliance (UDA) and the opposition got 14 votes each. 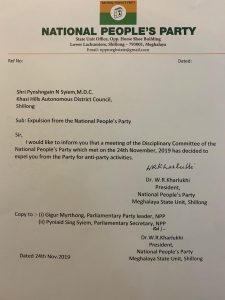 Syiem, who is part of the United Democratic Alliance (UDA), however, gave his vote in favour of the ‘no confidence motion’ which led to the collapse of the UDA-led Executive Committee under the leadership of Teiñwell Dkhar as CEM.

Syiem also voted for Independent MDC, Latiplang Kharkongor, during the election of the chief executive member (CEM) on Friday.

Syiem was elected as a member of district council (MDC) from the Mawkhar-Pynthorumkhrah constituency on NPP ticket in the KHADC elections held in February this year.

In the letter to Pynshngaiñlang N Syiem informing him regarding his expulsion from the party, NPP’s Meghalaya state unit president Dr WR Kharlukhi said: “I would like to inform you that a meeting of the Disciplinary Committee of the National People’s Party which met on the 24th November, 2019 has decided to expel you from the party for anti-party activities.”

All India directory of PR professionals in the offing

All India directory of PR professionals in the offing