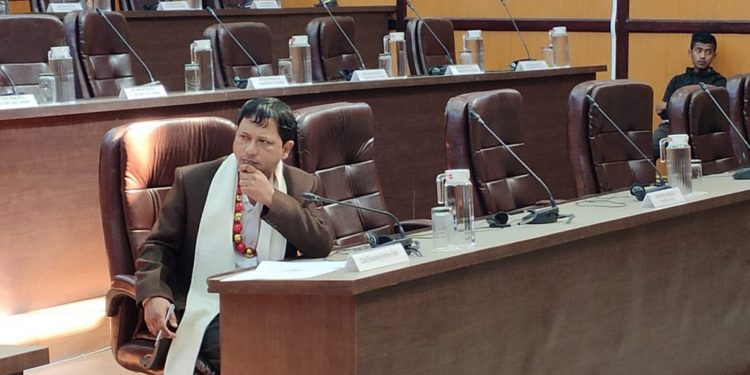 The election of four-time MDC Latiplang Kharkongor as the new chief executive member of the Khasi Hills Autonomous District Council (KHADC) has come with uncertainty.

The Meghalaya government shared the political situation in the council with the governor Tathagata Roy and urged him to take a call.

Kharkongor, who is an independent MDC from Nongthymmai constituency, was elected to the CEM post on Friday by members of the United Democratic Forum (UDF) in a one-sided election conducted by the chairman Pynshngaiñlang N Syiem.

Including the chairman, the UDF led by Kharkongor has 15 members.

The UDA members were not present in the house after Teiñwell Dkhar sent a letter to Syiem, informing that he has withdrawn his candidature for the election to the CEM post.

The chairman, however, said that he cannot accept the withdrawal letter of Dkhar because the letter reached him after the election process has already started.

“The letter should reach before the election process starts if a candidate wants to withdraw himself from the race,” Syiem said.

Syiem, who voted in favour of Kharkongor, said that the rules allowed him not only to participate in the election of CEM.

“As chairman, I have not violated the rules when the no-confidence motion was taken up on November 20 and during the election of CEM,” Syiem said.

Meanwhile the deputy chief minister, Prestone Tynsong told reporters on Friday evening the situation in the KHADC was shared and discussed with the governor.

Earlier, Tynsong met the delegation of the UDA members who apprised the government about the no-confidence motion on November 20 that led to the collapse of the executive committee and subsequent election of new CEM on Friday.

The UDA members submitted a representation on the collapse of the UDA-led executive committee in which both the ruling and opposition got 14 votes each.

The chairman of the council who presided over the House cast his vote against the executive committee.

Asked if the situation in KHADC warrants the imposition of administrator’s rule, Tynsong said, “We have already shared and discussed with the Governor.”

“We have already sent papers to the governor to decide on this,” he added.

Tynsong said that under this circumstance, even if the new executive committee was formed, how financial bills will be passed in the house since there is a tie between the two sides which will again create a problem.

“I feel that this present trend will not be good whether for the KHADC, JHADC or GHADC,” Tynsong said.

“If this is the situation, we clearly understand that it will surely create instability and this will lead to the formation of too many executive committees,” Tynsong added.

“Whether they will think about power or development of the Council, this is what we have discussed. This is my opinion that things cannot continue in this manner,” Tynsong further said.