The Anti-Corruption and Human Development Organisation (ACHDO) has urged the West Garo Hills deputy commissioner to ban plying of ‘over-loaded’ trucks from Bhutan carrying stones to Bangladesh through the state highway and AMPT Road.

The organization in a complaint lodged with the West Garo Hills DC on Tuesday alleged that the movement of the stone-laden trucks has caused more damage to the AMPT road, which is in dilapidated condition.

The organization is headquartered at Chibinang in West Garo Hills.

In its complaint, the ACHDO said “the heavy loaded trucks” which are “carrying stones from Bhutan to export Bangladesh are using damaged AMPT road day and night from last few days”.

The Garo Hills NGO strongly objected the movement of the trucks as “it is causing more damage to an already damaged road”.

The organization informed that these trucks, which started plying a few days ago on AMPT road”, continue to ply on the road despite the matter being highlighted through the media.

It said the people of the plain belt are vastly suffering due to terrible condition of the road since long and “plying of such overloaded truck is unacceptable”.

It may be mentioned that in July this year, West Garo Hills Police said plying of boulder-laden Bhutanese trucks were stopped via Tura-Paikan-Dalu NH following cases of rash driving by the drivers of these trucks and carrying boulders beyond permissible limits in gross violation of MV Act.

The ACHDO complaint signed by its president Ishraful Hoque alleged that “the recently repaired AMPT road has been peeling off due to the movements of such overloaded trucks”.

“The road has been started repairing after quite long times and the road is peeling off within few months which will let the people in same pain despite spending crores of rupees on repairs work which is just wasting of funds,” the complaint letter said.

It also alleged that the speed of the trucks is “extremely high that once it brakes about 2-3 feets peel off of the underway repairs road and such over speed could harm human life too in near future”.

It also raised question over allowing export of goods through the state highway instead of the National Highway.

It also referred to Supreme Court rulings that the overloaded vehicles should not be allowed to run on highways.

The organization questioned the DC whether the exporters have permission to use the AMPT road.

If they have any permission to use the APMT road to transport stones from Bhutan to Bangladesh, the ACHDO requested the government through the DC to cancel “such order immediately in interest of the general public”.

The NGO cautioned that if the trucks continue to move through the AMPT road, they may call for peaceful, democratic (legal) agitation against the movement of such trucks. 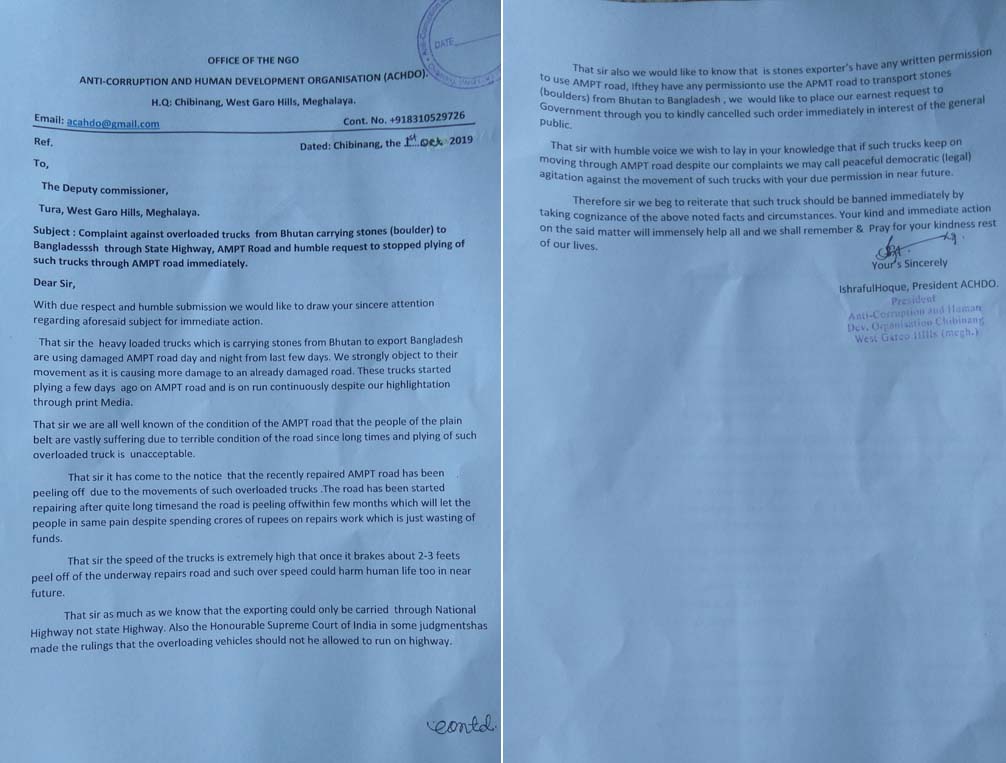