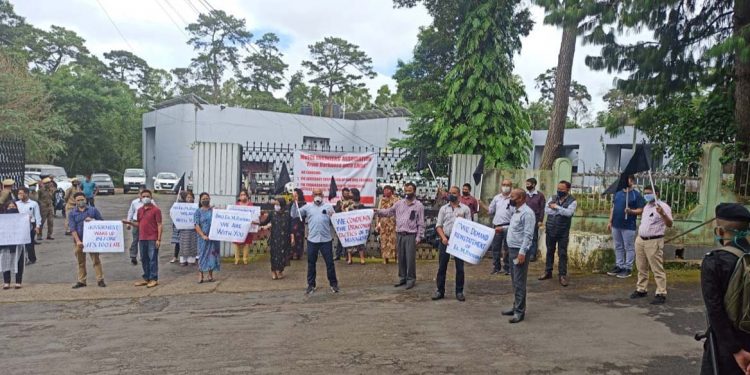 The employees of Meghalaya Energy Corporation Limited (MeECL) on Tuesday staged protest in their respective office premises against the “arbitrary” suspension of engineer M. Pohshna.

The suspension of Pohshna on August 3 has been attributed to the failure of two generator transformers on July 21 and 26 at Suchen.

It has also been stated that the spare transformer, placed at the disposal of the project for the purpose which was then installed on July 25, also failed on July 26 forcing the shutdown of the affected unit.

Irked over the suspension of their colleague and member, the MeECL Engineers’ Association (MEA) organized the protest by wearing black badges, carrying placards and sticking banners on in offices, power stations and substations premises across the state.

During lunch break, the employees, who wore black badges while during working hours, took out banners, placards, and black flags in their respective office premises to show solidarity with the suspended engineer.

Shullet said the suspension of the engineer was “unjust and arbitrary” as the engineer cannot be held responsible for the failure of the generator transformer, and without having any investigation and without giving an opportunity to the engineer to explain.

The MeECL Engineers’ Association said the failure of the transformer was purely an unforeseen incident which could be attributed to many external factors such as lightning surges, internal winding failures, real time loading which can be determined after proper investigations.

The Association said the failure of the transformer on July 26 had a past history of failures and was repaired several times by the original transformer manufacturer at site during which, the transformer was not subjected to impulse and high voltage test as per prevailing standards.

“The officer has also submitted a petition to the management and we hope it will take things positively and reinstate the engineer,” Shullet said.

The Association will discuss the matter and decide further course of action if no positive response comes from the management, Shullet added.