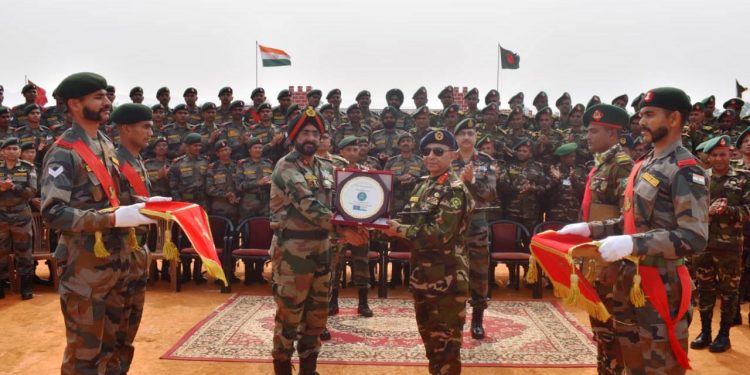 The two-week long exercise "SAMPRITI-IX" that commenced on February 3, concluded with a closing ceremony on Sunday.

The ninth edition of the joint military exercise between the Indian and Bangladeshi armies at Umroi in Meghalaya concluded on Sunday.

The two-week long exercise “SAMPRITI-IX” that commenced on February 3, concluded with a closing ceremony on Sunday with the head of observer delegations from both sides conveyed their appreciation for both the participating contingents for successfully achieving the objectives of the exercise.

A magnificent parade and the customary exchange of mementos marked the successful completion of Indo-Bangladesh joint exercise.

A delegation comprising of 31 officers and 138 other ranks of Bangladesh Army led by brigadier general Md Shafiul Azam of the 42nd Bangladesh infantry regiment, while the Indian Army is led by Brigadier Rajesh Sharma of the Bihar regiment, participated in the “Sampriti-IX”military exercise.

The exercise was aimed at strengthening the military relations between the two countries, which allowed the two armies understand each other’s tactical drills and operating techniques.

The exercise provided an ideal platform for the personnel of the two countries to share their experiences on counter insurgency, counter terrorism operations and providing aid to civil authorities for disaster management especially in jungle and semi-urban terrain.

The joint exercise is a very important military and diplomatic initiative between both the nations and the edifice of the trust and friendship between India & Bangladesh which has been nurtured with the sweat and toil of Officers and soldiers of contingents participating in each edition.

Besides training, both the contingents participated in a number of activities including friendly volleyball and basketball matches.

During the exercise between the armies of the two neighbouring countries, specific input of terrorists presence and hostage situation by villagers to company commanders carrying out area domination, insertion of specially trained house intervention teams using two helicopters, house clearance and room intervention drills, hostage rescue, IED detection by army dogs, neutralisation of IEDs by bomb disposal team amongst other exercises were carried out.

The Sampriti-IX is an exercise carried out jointly between India and Bangladesh for operating in a UN environment under chapter VII.