A 14-day joint military exercise ‘Sampriti-IX’ between the Indian army and Bangladesh army began at Umroi, around 30 km from Shillong, on Monday.

The joint military exercise is a part of the ongoing Indo-Bangla defence cooperation.

The Indo-Bangla joint military exercise, being conducted at the military station at Umroi in Meghalaya, will conclude on February 16.

Exercise Sampriti is an important bilateral defence cooperation endeavour between India and Bangladesh, and it is the ninth edition hosted alternately by both the countries. 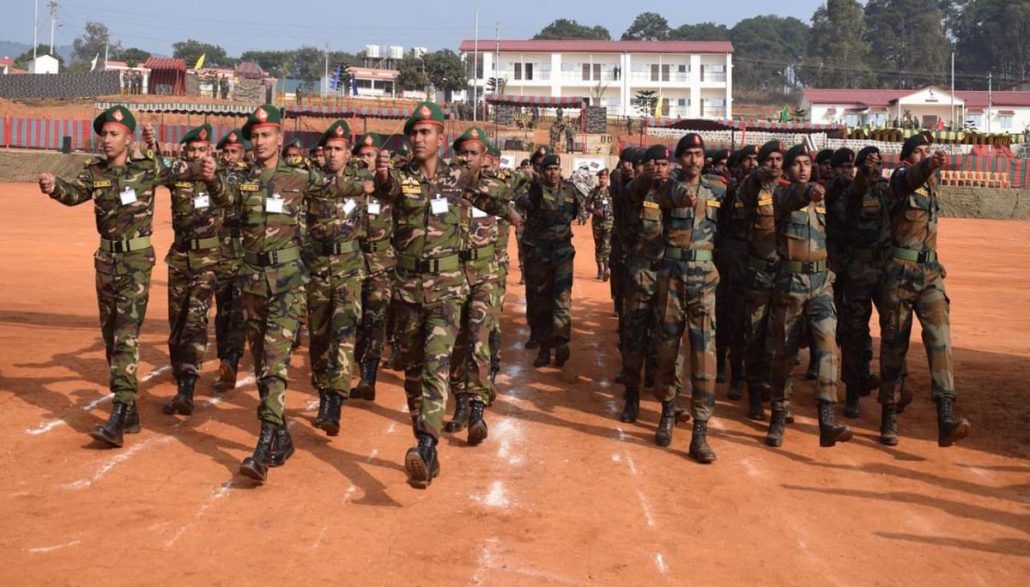 Sharma, who welcomed the Bangladeshi contingent, said the main focus of the joint military exercise is on counter-terrorist operations in mountainous and jungle terrains under the United Nations mandate.

Stating India and Bangladesh have progressed on a path of mutual co-existence and peace as neighbours and fellow developing nations, Sharma said both the nations also engaged in the process of socio-economic transformation of the people at an unprecedented pace and on a large scale.

“The exercise will go a long way in honing the skills of both the contingents based on sharing of specialized knowledge and tactical expertise in a period of time while operating in various scenarios,” Sharma said. 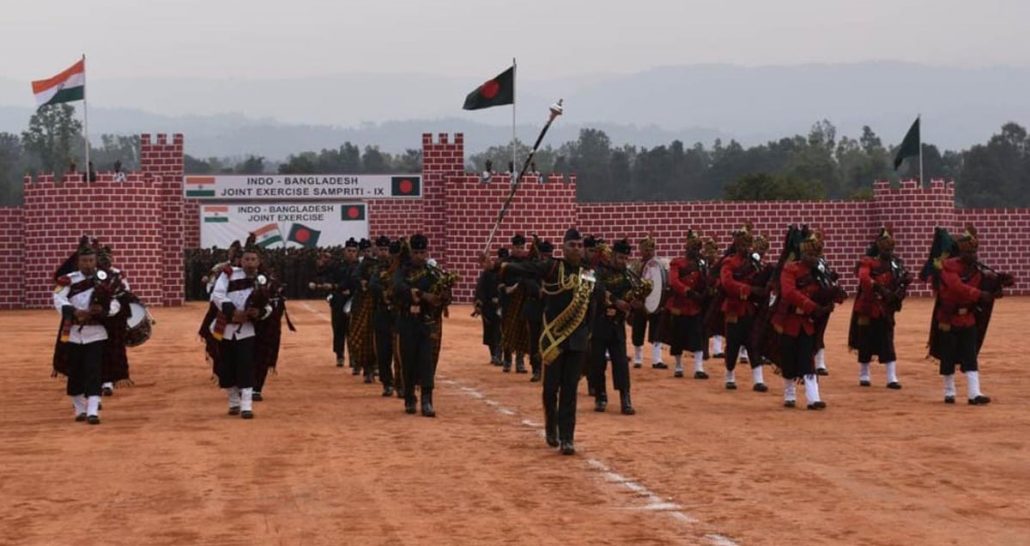 “This will also ensure that towards the culmination of the joint exercise, both the contingents would have achieved the highest standards of interoperability and associated skills to counter any challenge in the ever-changing threat scenarios specially being the largest troop contributors to the United Nations peacekeeping mission,” Sharma added.

He hoped the Indo-Bangla joint military exercise will yield excellent results and strengthen the bond between the two nations.

Terming Bangladesh and Indian armies as two neighbouring ‘friendly armies’ Azam said, “The Bangladesh army has always benefitted from the support given by Indian army and a good number of participants from Bangladesh come every year to India to undertake training in Indian military establishments.” 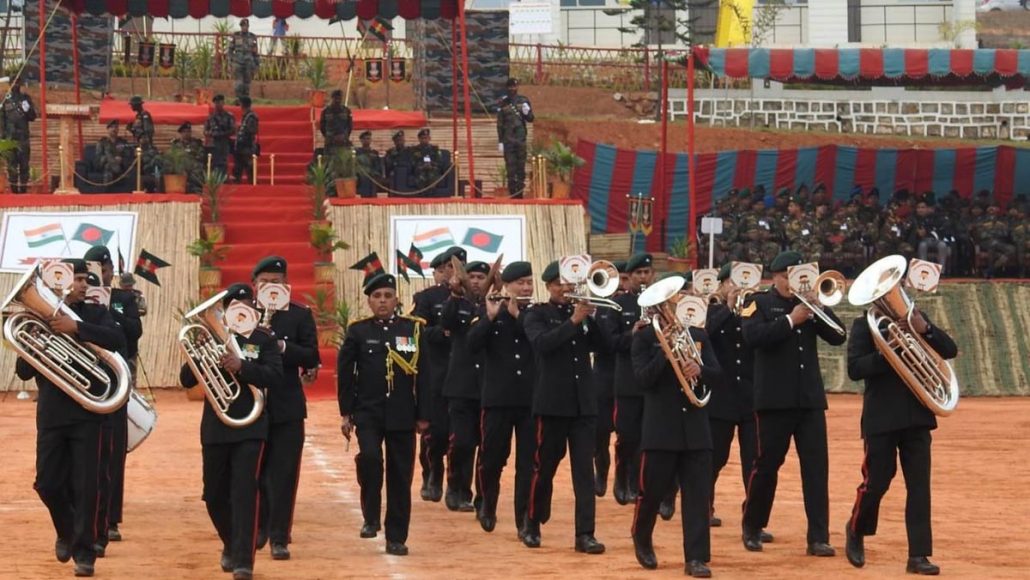 “This has really contributed towards developing the standard of officers and men. Bangladesh army also received a good number of persons from the Indian army for training. Both the armies have multifarious engagements in different fields,” Azam added.

Stating the aim of the joint military exercise is to build and promote positive relations between India and Bangladesh armies, Azam hoped that that through this exercise, the relation would be better than before and officers and men will be more knowledgeable after the exercise.

Each side comprises 128 jawans, 12 officers and 10 junior commission officers (JCOs).

On the inaugural day of the Indo-Bangla joint military exercise, both Azam and Sharma reviewed the parade of both the contingents and military bands including the Assam Regiment band enthralled the jawans and officers present. 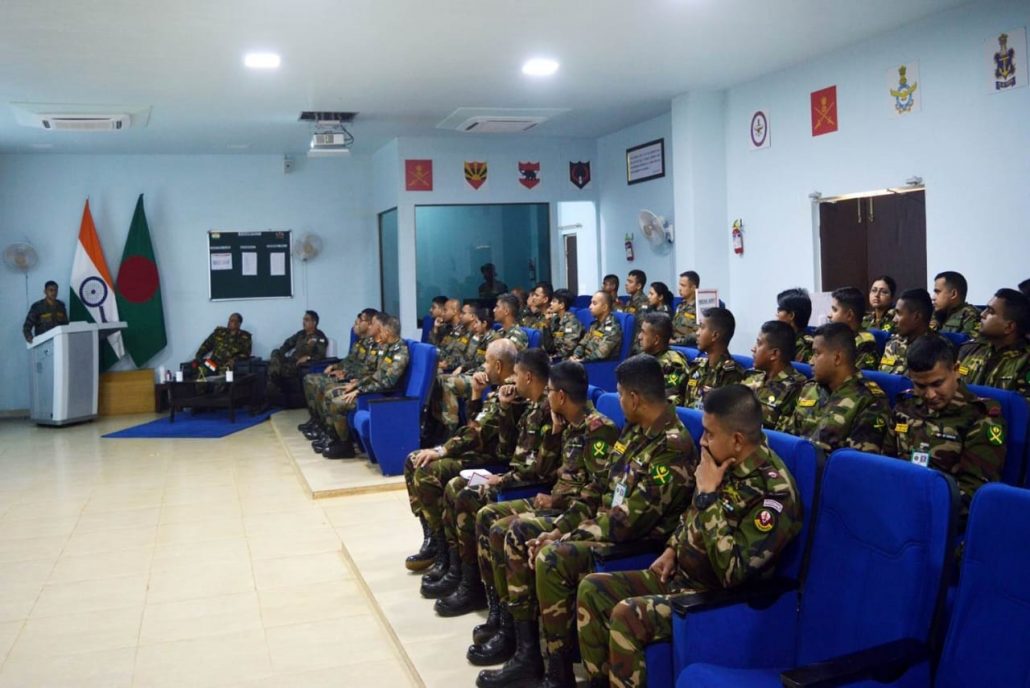 During the joint military exercise Sampriti-IX, a Command Post Exercise (CPX) and a Field Training Exercise (FTX) will be conducted.

For both the CPX and FTX, a scenario where both the nations are working together in a counter-terrorism environment will be simulated under the United Nations charter.

The joint military exercise will culminate with a final validation exercise in which troops of both armies will jointly practice a counter-terrorist operation in a controlled and simulated environment.

In addition, to understand each other at a tactical level, greater cultural understanding will be emphasized to strengthen military trust and cooperation between the two nations.