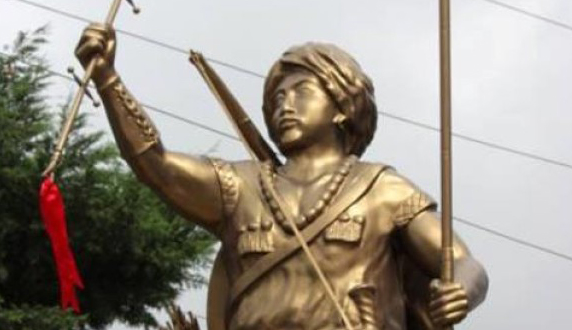 The Meghalaya government is mulling acquiring spaces for erecting statues of legendary leaders who had rebelled against the British in Khasi, Jaiñtia and Garo regions much earlier than the 1857 India’s First War of Independence.

Urban affairs minister and former Khasi Students Union (KSU) leader, Hamletson Dohling while addressing a small gathering to commemorate the 183rd death anniversary of Khasi chief, U Tirot Sing Syiem, said that he would initiate the move that the state government should find spaces within Shillong city for erecting statues of leaders who fought against the British –  U Tirot Sing Syiem, U Kiang Nangbah and Pa Togan Nengminza Sangma.

U Tirot Sing started the revolt against the British on April 4, 1829 after they attempted to take over control of the Khasi Hills.

“I will initiate this move and discuss with colleague in the Cabinet. As a community, we need to respect our leaders, and pass on the spirit to our younger generations so that they know how to respect and pay tribute to our legendary leaders,” Dohling said.

The Minister also urged the youth to remain firm in their commitment to do something for the good for the community and state. Floral tributes were paid on the day.

On the occasion, the commemoration was organized by the KSU at the memorial statue of U Tirot Sing at Madan ïewrynghep in Shillong.

KSU president, Lambokstarwell Marngar while paying tribute to the Khasi leader, called upon the government to work in a transparent manner especially in job recruitment for the youth.

The commemoration was also observed at the native place of U Tirot Sing at Nongkhlaw, by the Hima Nongkhlaw.

Other organizations like the Hynñiewtrep Youth Council (HYC) also commemorated the day and renewed their commitment to fight against forces that attempt to weaken the identity of the indigenous tribes.

U Tirot Sing Syiem — the popular Syiem (chief) of Hima Nongkhlaw or the Nongkhlaw state of the pre-Independence era was one of the chiefs of the Khasi people.

When the British gained control over the Brahmaputra valley after concluding the Treaty of Yandabo in 1826. They wanted to construct a road to connect Guwahati with Sylhet to save weeks of travel between their possessions in Sylhet and the newly acquired possessions in Lower Assam intervened the Khasi Hills. David Scott, the agent to the British Governor-General for the Northern Territory, found out that U Tirot Sing was interested in regaining possessions in the duars (passes into Assam) in return for the permission for the road project.

After a two-day session of the Durbar (assembly) it was agreed to the proposal of the British and work on the road project started. When Balaram Singh, Raja of Ranee, disputed U Tirot Sing’s claims to the passes, he went with a party of armed men in December 1828 to establish his claim.

He was confident that the British would support him, but he was instead confronted by a party of sepoys who blocked his passage. When news came that the British were reinforcing forces in Assam, U Tirot Sing convened a Durbar again, and passed orders for the British to evacuate Nongkhlaw.

The British paid no heed, and the Khasis attacked the British garrison in Nongkhlaw on 4 April 1829.

U Tirot Sing’s men killed two British officers, and thus unleashed the fury of British retaliation. Military operations against U Tirot Sing and other Khasi chiefs were started immediately.

In the Anglo-Khasi War, the Khasis lacked firearms and had only swords, shields, bows and arrows. They were untrained in the British type of warfare and soon found that it was impossible to engage in open battle against an enemy who could kill from a distance.

Instead, they resorted to guerrilla activity, which dragged on for about four years. U Tirot Sing fought with only with native weapons such as a sword and shield, he was shot at by the British and had to hide in a cave.

He was eventually captured by the British in January 1833 and deported to Dacca (now Dhaka) the location of his hiding place was given by a chief of his who was bribed with gold coins by the British.

U Tirot Sing died on July 17, 1835 and his death anniversary is commemorated every year as a state holiday in Meghalaya.