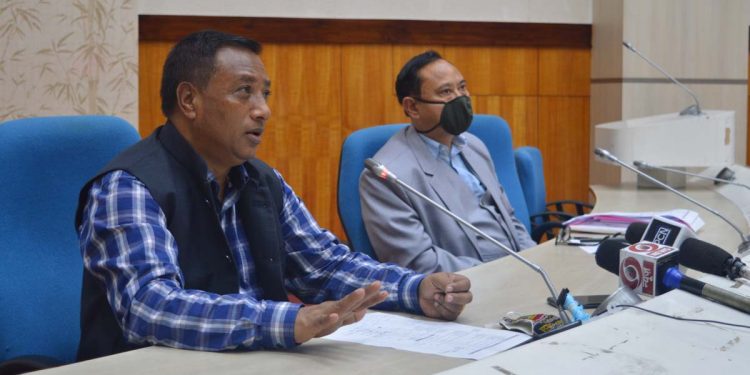 Meghalaya government has been left red-faced after 41 persons from the state crossed over to Assam to attend a wedding party at Greenwood Resort in Guwahati amidst the ban on inter-state movement.

One of those from Shillong, who attended the wedding party, tested positive for COVID19 on Monday.

During a press briefing, health minister AL Hek and the director of health services (MI), Dr Aman War, could not provide an answer as to how these persons managed to attend the wedding party at a time when the inter-state movement has been “banned” by the Meghalaya government.

War said he has no information related to the permission given to them to go and attend the wedding party in Guwahati.

The people of Meghalaya are also questioning the state government on how the ban on inter-state movement is being imposed because people from outside the state continue to enter Meghalaya every day.

People fear that Coronavirus has spread to the community in some areas after a number of people from outside Meghalaya who came to the state have been infected by the virus.

Movement of people from other places to Meghalaya is continuing every day.

Health Minister Hek informed that the number of people from other states, who arrived in Meghalaya on Monday, was 20,282.

“The government cannot stop the citizens of Meghalaya from coming in as well as people from other states, who are working in Meghalaya,” Hek said.

The Meghalaya government had earlier asked only its stranded citizens who want to return to the state register with the state government.

There were 10,287 stranded citizens who had registered with the state government before returning to the state.

Hek informed that there are many persons who came to Meghalaya without registering themselves in advance, and the state government is arranging transportation on payment basis.

After recording very few COVID19 positive cases in the last few months, Meghalaya has suddenly seen the rise of positive cases between June 30 and July 6.

Till June 30, there were only 53 positive cases including 10 active cases.

However, till July 6 (Monday), the number of active cases has gone up to 36, taking the total positive cases to 80 in the state.

So far, 43 people have recovered from the disease, and one has died.