Meghalaya gets its own police academy

A view of the Meghalaya Police Academy at Umran in Ri-Bhoi district. Image credit – Northeast Now

Meghalaya now has its own police academy.

Located at Umran in ñiangbyrnai under Ri-Bhoi district, about 33 km from Shillong, the Meghalaya Police Academy was inaugurated by chief minister Conrad K. Sangma on Wednesday.

With the inauguration of the newly-built police academy at Umran, now there are two police academies in the state.

The other police academy is the North Eastern Police Academy (NEPA) at Umsaw Khwan in Ri-Bhoi district.

NEPA under the ministry of home affairs started functioning from July, 1978 and police officers from various states of the Northeast are being trained in this academy.

Work for constructing the Meghalaya Police Academy started in 2013 for the first phase at a cost of Rs 50 crore under the 13th Finance Commission.

The police academy can accommodate 40 trainees.

An amount of Rs 92 crore under the 15th Finance Commission has been earmarked for the second phase of construction to further expansion of the police academy.

In his address, Meghalaya chief minister Conrad Sangma expressed his gratitude to all those who have played a pivotal role in bringing the idea of the state’s very own police academy to fruition.

He said the premier training institute will cater to the training of police personnel not only from the state but the whole region as well.

Emphasising the importance of developing quality human capital, the Meghalaya chief minister said, “The new police academy will equip our men and women in uniform with the right knowledge and skills to cope with the changing dynamics of policing in the state.”

“As a government, it is our duty to ensure that our human capital becomes productive. If we have quality manpower, our productivity will go up.”

“With state of the art infrastructure and the right ingredients of novel and effective teaching techniques, we can ensure proper training to our police force and improve their effectiveness,” the CM added.

Stating that fighting insurgency occupied most of the police department’s time, energy and resources in the recent past, Conrad said the state now is going through a relatively peaceful phase.

He stressed the need for the state police to be ready to face new challenges in the era of the increased digitally connected world. 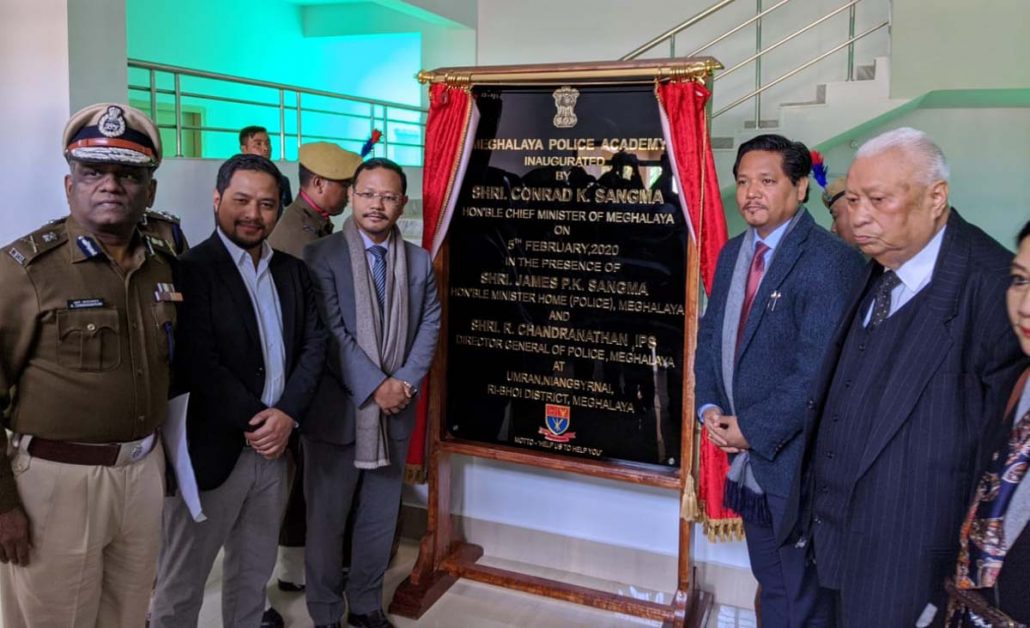 “We have cyber crimes taking place and not just cybercrimes, but the entire technology aspect has made maintaining of overall law and order situation much more complicated,” he said.

In his keynote address, home minister James K. Sangma while congratulating all the departments involved in setting up the academy, expressed his special gratitude to the ministry of home affairs for their support.

He said the Meghalaya Police Academy will be a hallmark of excellence with efficiency and relevance.

The police academy will be a centre to increase the capacities of the police officers within and beyond the state in handling contemporary crimes and also bring about accountability, added James Sangma.