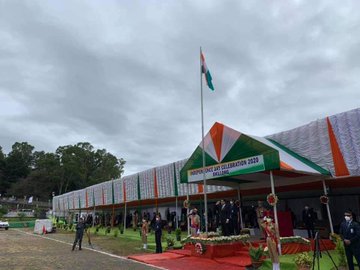 While greeting the people of the State on the occasion, Sangma in his speech said ‘this is an unusual year and we are living through unprecedented times’.

“The COVID-19 global pandemic has disrupted economic and social life like never before. It necessitated drastic measures like a 40-day national lockdown and the most stringent travel restrictions. Societies across the world are adapting to new norms of social distancing, staying indoors and conducting interactions remotely,” he said.

He said in these testing times, ‘we take inspiration from our freedom struggle and recollect with gratitude the contributions of leaders like Mahatma Gandhi, Pandit Jawaharlal Nehru, Sardar Vallabhai Patel, Subhash Chandra Bose and Dr B R Ambedkar in building our great nation.

“We are also proud of the contributions of the patriots of our own State, U Tirot Sing, U Kiang Nangbah, Pa Togan Sangma; and of their selflessness and steadfast devotion to the cause of freedom,” he said.

The COVID-19 pandemic has caused loss of lives and well-being and led to wholesale disruption of the economies across the globe, Sangma said.

He said this was also the time when a large number of the people of the State were stranded in different parts of the country and needed support.

The Government acted swiftly to provide relief to over 10,000 such stranded citizens and transferred an amount of Rs 3,000 each to their bank accounts, he said.

He also pointed out that the Government also ensured that provision kits consisting of necessities like food, sanitary products and medicines were delivered to every quarantined household.

Till date around 29,000 such provision kits have been distributed, he informed.

The COVID-19 situation has reduced the Independence Day celebrations to a low key affair in Meghalaya with only Chief Minister Conrad K Sangma taking the salute and unfurling the National Flag on Saturday, while other ministers and MLAs did not do so.

In other district headquarters and civil sub divisions, district officials took their part as ministers and MLAs did not take the salute on Independence Day.

Meanwhile, the heritage Raj Bhavan in Shillong city, which is usually thrown open to the general public during National Days every year, was not opened for the general public on August 14 and 15 due to the current COVID-19 situation.