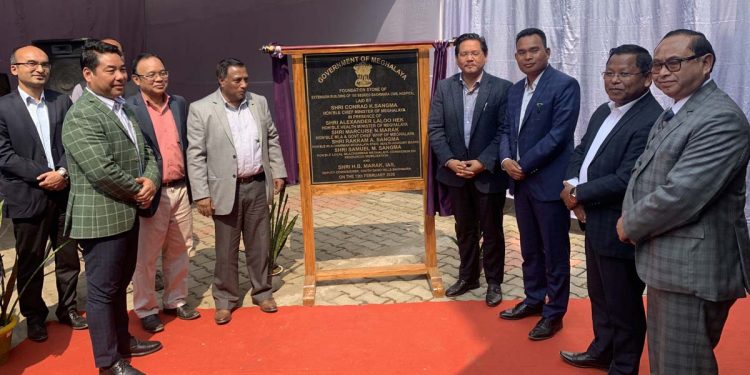 Laying the foundation stone for the additional building of the 100-bedded hospital, the Meghalaya CM said, “It has been the commitment of the government to give special attention to areas, which has remained neglected.”

“South Garo Hills is one of the districts that has been accorded thrust so that the region can catch up with the pace of development with other districts of the state,” Conrad Sangma said.

Health minister AL Hek said the project will be completed within the stipulated time of 24 months.

He expressed dissatisfaction on the delay of projects and has assured that this government will ensure that the projects were completed on time.

Hek said the new building will be dedicated to former MLA Lordsigh Sangma.

The Meghalaya chief minister also unveiled the plaque to lay the foundation for the new Circuit House in Baghmara on Thursday in presence of health minister AL Hek and other dignitaries.

“Every person’s productivity is instrumental in the growth story of Meghalaya,” said the Meghalaya CM.

“We need to ensure that our human capital progresses through the efficiency of our people and our youth. It is a responsibility we must cultivate.”

“That is how our economy will grow and that is how Meghalaya will rise,” the chief minister said at the school function.

He also stressed the need for individual productivity and action to derive collective growth for the state while addressing the gathering of young girls, teachers, educators and administrators.

“Only if we do that, we can see the economy of our state and our country grow,” the CM added.

He added that while 33 lakh people of Meghalaya are producing Rs 35,000 crore, in contrast, the economy of Iceland is close to 30 billion dollars (close to Rs 2 lakh crore) where the population is only 3.3 lakhs.

“This means that we are failing somewhere. Every person’s productivity is instrumental in the growth story of Meghalaya. We need to ensure that our Human Capital progresses through the efficiency of our people,” said the CM.

“We have 24 hours in a day and we must ask ourselves if we are productively utilizing our time.”

“If the government, the officials and the public at large start to work towards this objective, I am sure that our state will be at par with other places around the world.”

The CM also visited the Captain Williamson Memorial School at Baghmara, the only degree college in South Garo Hills and assured that priority would be accorded to develop the infrastructure of the college.