The two complaints were sent to the Chairperson of NGT and the Director of Impact Assessment Division of the Ministry of Environment, Forest and Climate Change 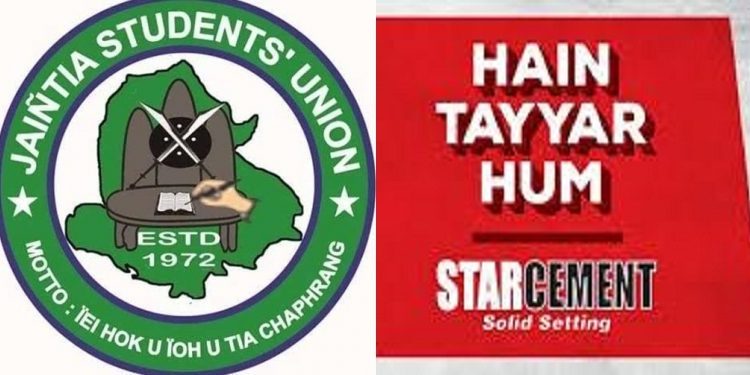 The Jaintia Students Union on Friday registered two separate complaints with the National Green Tribunal (NGT) and Ministry of Environment, Forest and Climate Change against the Environment Clearance accorded to Star Cement for a major expansion project in Meghalaya.

The MoEF&CC recently had accorded Environment Clearance to Star Cement, the largest producer of cement in Northeast India, for mining limestone and shale on a 42.05 Ha area at Brishyrnot village in East Jaintia Hills district of Meghalaya.

The Jaintia Students Union (JSU) on October 10, 2019 had submitted its objection to the proposed mining project before the Chairman, Meghalaya State Pollution Control Board. 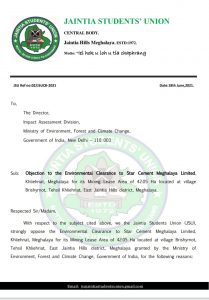 Despite strong opposition by the local population, the JSU expressed surprise as the MoEF&CC on June 8 (vide letter No J – 11015/17/2019-IA.II(M) dated 08-06-2021), accorded Environment Clearance to Star Cement for its Mining Lease Area of 42.05 Ha at Brishyrnot village in East Jaintia Hills district of Meghalaya with a production capacity of 2.507 million TPA of limestone and 0.217 million TPA of shale.

The JSU described the Environment Clearance to Star Cement as “highly illegal” and said it violated the prescribed rules and norms.

“It is evident that the Meghalaya State Pollution Control Board has usurped the rights of the local residents and groups and has forcefully suppressed the voices of the concerned affected people,” the complaints filed by Jersom Shylla (President) and Treiborlang R. Suchen (General Secretary) of JSU, said.

These rivers, especially river Lukha and river Lunar are major sources of livelihood for the people of the neighboring villages, and most of them consume water from these rivers.

The two rivers are already polluted because of destructive mining activities by several large cement factories in the area. During the winter months, it is a matter of serious concern as the water of river Lukha turns ‘deep blue’. 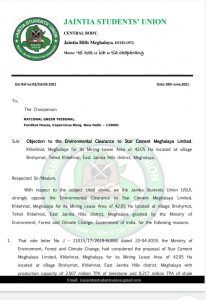 Moreover, the proposed mining site is located only 1.4 kms from the Narpuh Wildlife Sanctuary while the mining lease boundary is only around 0.25 kms from the eco-sensitive zone of the wildlife sanctuary, thereby posing a grave threat to the rich flora and fauna.

The JSU leaders criticized the Meghalaya government for “blatantly denying” recently its involvement in recommending and granting clearance to the mining project of Star Cement.

The students’ organization demanded that the Environment Clearance issued to Star Cement be cancelled as per para 8 (vi) of the EIA, 2006 as the Meghalaya State Pollution Control Board had submitted “false and misleading information” to the MoEF&CC.