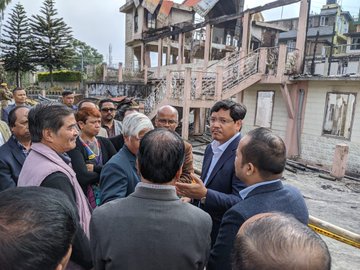 Meghalaya chief minister Conrad Sangma at the site of the church which was gutted. Image courtesy: Twitter @SangmaConrad

Meghalaya chief minister Conrad Sangma on Monday paid his respects at the funeral of the couple who allegedly died to suffocation after the devastating inferno at Church of God at Qualapatty in Meghalaya’s capital Shillong spread to their house.

As per reports, the couple Reliable Laloo and Tiameren Basaiawmoit had to unfortunately lose their lives in the inferno as both of them had gone to retrieve a wedding gown from their house.

Laloo , who was a fashion designer and a tailor, had made the wedding gown for a new bride.

Moreover, she was also an expert in flower arrangements and had done decorative arrangements for a number of events.

Laloo’s husband Basaiawmoit was a commerce teacher at All Saints’ Diocesan Higher Secondary School in Shillong.

After witnessing the massive inferno at the church on Sunday, the couple had taken out their belongings and had gone out from their house but their decision of retrieving the wedding gown later spelt doom for their lives.

The couple, who were childless, had two pet dogs, out of which one lost its life in the fire while the other managed to escape somehow.

It may be mentioned that the inferno at the Church of God at Qualapatty started in the wee hours on Sunday.