All local taxi /auto rickshaw operators of all districts in Meghalaya directed to keep their taxis off the roads on March 24, 25, 27, 28 & 29

In order to prevent the spread of coronavirus, the Meghalaya transport department has restricted movement of public transport including local taxis and auto rickshaws.

The commissioner & secretary to the transport department of Meghalaya, MR Synrem, in an order issued on Sunday said “it is necessary to take steps to prevent the spread of Covid-19 in the state of

“To achieve this objective it is imperative to restrict the use of public transport by way of local taxis / auto rickshaws”, said IAS officer Synrem in the order.

Through the order, the transport commissioner & secretary said “it is mandated to restrict the operation of local taxis /auto rickshaws in the districts of East Khasi Hills, West Jaintia Hills & West Garo Hills.”

It has been directed that “only 25% of all local taxis (four-wheelers & three-wheelers) within the jurisdiction of East Khasi Hills, West Jaintia Hills, West Garo Hills districts shall operate their vehicles” on specific dates.

According to the order, on March 23 & 26, 25% of local taxis /auto rickshaws in the East Khasi Hills, West Jaintia Hills and West Garo Hills districts shall operate and remain on road.

It has also been directed that all local taxi /auto rickshaw operators of all the districts will keep their taxis off the roads and will not operate on March 24, 25, 27, 28 & 29.

“Special permission for medical emergencies may be obtained from respective DTOs,” the order said.

“It is further reiterated that all local taxis /auto rickshaws plying on the above dates are to ensure that there is proper social distancing and there shall be no close contact among the passengers,” the order said.

The transport commissioner & secretary directed all the District Transport Officers (DTOs) to ensure that the order is strictly followed. 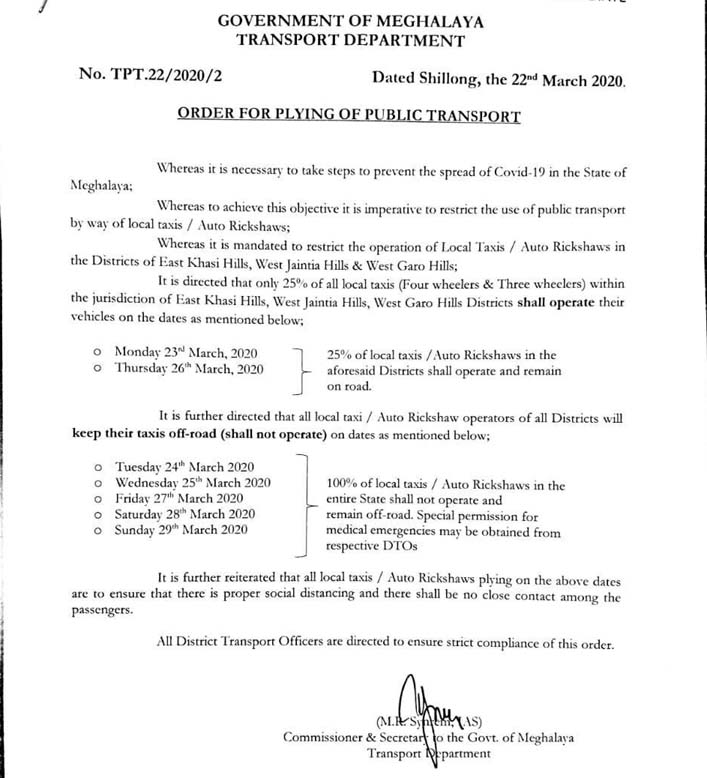