A group of Bangladeshi dacoits first attacked the BSF troops at Rongtila, then attacked a villager at Amdoh and snatched his SBBL gun 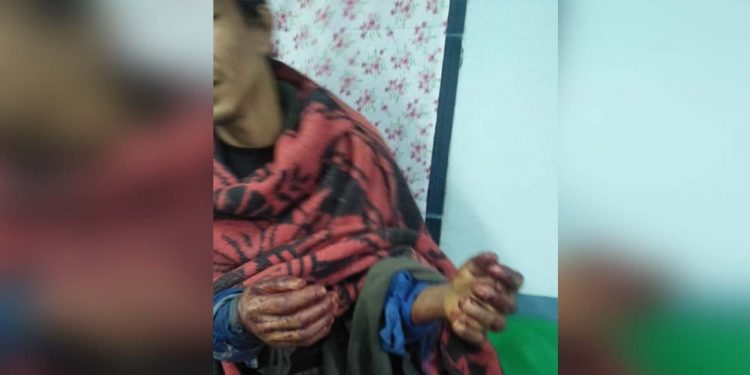 The villager who was injured in the attack by Bangladeshi dacoits at Amdoh along the Indo-Bangladesh border in Meghalaya. Image credit – Northeast Now

In a fresh incident of attack by Bangladeshi dacoits, one BSF jawan and an Indian villager were injured at Amdoh village near Rongkum along the Indo-Bangla border in the wee hours of Wednesday.

The village is located between Dawki and Muktapur, the last Indian village in the area, bordering very close to Bangladesh.

The injured Indian villager identified as P. Bareh of Amdoh village and the injured BSF jawan identified as Havaldar Shivshankar Dey were taken to separate health centres for treatment.

An official in the BSF Meghalaya Frontier Headquarter at Mawpat in Shillong confirmed the attacks carried out by the Bangladeshi dacoits.

The group of dacoits first attacked the BSF troops at Rongtila, who were patrolling the area at 12.30 am-midnight.

Later the group went to attack the villager with a sharp weapon at Amdoh and snatched his SBBL gun.

Before the gun was snatched, the villager fired with his SBBL gun at the attackers, and one of them was injured, sources said.

Around 15 dacoits were involved in the attack.

Sources informed that a flag meeting was also held at Rongtila on Wednesday afternoon between officials of the BSF and Border Guards of Bangladesh (BGB) regarding the incident.

The BSF demanded strong action against the Bangladeshi criminals.

The fresh attacks occurred few days after the attacks by Bangladeshi robbers on Indian villagers in the same area along the Dawki-Nongtalang road on January 3-4.

Five villagers were injured in those incidents where the attackers vandalised the cars of the injured villagers who returned from a marriage party and snatched their valuables, after which they flew to Bangladesh.

Meanwhile, members of the Jaiñtia Students’ Union (JSU) along with some headmen from the Dawki area met Meghalaya home minister James K Sangma and apprised him about the incidents that have caused fear among the border residents in view of the repeated attacks by the Bangladeshi nationals.

The JSU and the village headmen also demanded immediate deployment of security personnel in the area and instill a sense of safety and security among the people.

The JSU pointed out that the shortage of police, as well as BSF personnel in the area, has led to Bangladeshi criminals taking advantage of the situation.

“We often found that the state police and BSF personnel were not adequate in numbers while patrolling the area,” JSU spokesperson Treibor Suchen said.