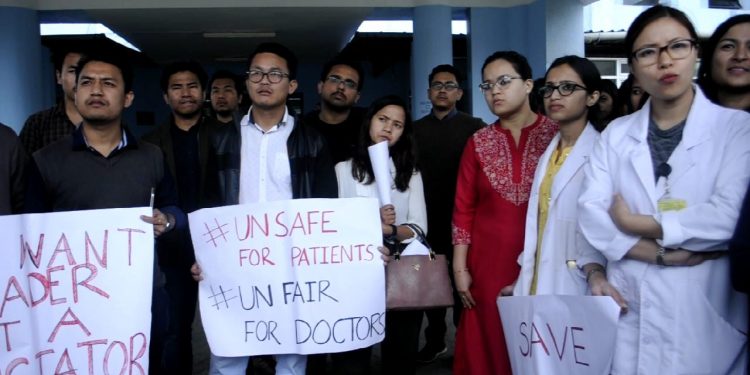 Resident doctors of the North Eastern Indira Gandhi Regional Institute of Health & Medical Sciences (NEIGRIHMS) resorted to agitation on Thursday demanding the removal of director Dr DM Thapa due to his alleged autocratic style of functioning, even as they called off the agitation following the intervention of Meghalaya health minister AL Hek.

Doctors under the umbrella of NEIGRIHMS-Resident Doctors’ Association (NRDA) have called for a total shutdown of medical services from Thursday to mount pressure on the Union health ministry to remove the demanding the immediate removal of incumbent director of the institute.

AL Hek in his statement appealed to all doctors to desist from strike or shutdown in NEIGRIHMS in the interest of the patients.

“I have already had a meeting with the agitating resident doctors and they have decided to call off the strike after the meeting in my chamber,” Hek said.

The Association has also dashed a letter to the Union health ministry seeking immediate intervention into the grievances.

The president of the association, Dr Synrang Batngen Warjri said that there was no other option left but to save the institute from further devastation which was why, this total shutdown of services was called from today (April 4) till the incumbent autocratic director is removed/repatriated from the post.

In a 13-point letter submitted to the Centre, the association said that since the joining of the director there has been de-recognition of Post Graduate seats including the department of anaesthesia, general surgery, radiology, and general medicine due to lack of administrative will.

The Association also said that faculties are resigning from various departments including the department of medical oncology, anaesthesia, gynaecology and obstetrics, paediatric, radiology, orthopaedics which added more problems to the institute and affecting the people of North East India.

He also said that some of the faculties like department of obstetrics and gynaecology, department of cardiology are being forcefully removed by the director for reasons best known to him.

The association also accused the director of harassing students through his accomplices by interfering with the examination process of students, thesis, submissions, and disbursement of salaries.

“This is very unbecoming and a shameful act by an autocratic director. The association strongly believes that a teacher trying to destroy the career of his own student can never work for welfare of an institute,” Warjri said.

Hek said that such a shutdown of medical services would affect the patients and it may even result to loss of valuable lives.

“From the side of the state government, we have taken cognizance of the serious matter and upon being informed about the shutdown by the agitating doctors, I have taken up the matter with officials of ministry of health and family welfare to resolve the matter,” Hek said.

He informed that letters have also been sent from his side to  the director  of NEIGRIHMS and agitating  doctors  to  resolve all issues and desist from  such extreme  action which would  result  in difficulties to patients.

Urging the agitating doctors to desist from shutdown, Hek assured that their grievances would be addressed at the earliest.

“Only a few months back, I met the Union health minister, JP Nadda along with chief minister, Conrad K Sangma in New Delhi and the minister has assured to take action to resolve all outstanding issues,” Hek said.