Awasti who belonged to the 1985 batch IPS officer of the Assam-Meghalaya cadre, took over charge from outgoing DGP, Swaraj Bir Singh who retired from service on Tuesday.

Swaraj Bir Singh was due to retire in May this year, but the NPP-led Meghalaya Democratic Alliance (MDA) government extended his service for three months. 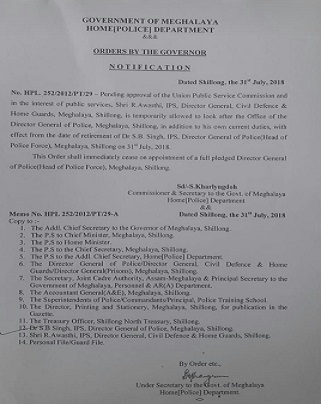 On June 11, Swaraj had offered to resign from the DGP post following the appointment of former Meghalaya DGP, Kulbir Krishan, as Security Adviser to Chief Minister Conrad K Sangma.

The appointment of Awasti as acting DGP of Meghalaya on Tuesday assumed significance in the wake of report that the Meghalaya Democratic Alliance (MDA) government is preferring to see another senior IPS officer, Rajeev Mohan Singh as full time police chief of the state.

RM Singh is a 1984-batch IPS officer of the Assam-Meghalaya cadre who is at present serving as Chairman-cum-Managing Director of the Assam Police Housing Corporation Ltd.

Earlier, the Assam government did not pick up RM Singh for the DGP post, despite being the senior most IPS officer. The Assam government instead appointed Kuladhar Saikia in place of Singh as the new Director General of Police  after the retirement of Mukesh Sahay.

A notification issued by the commissioner and secretary home (police) department S Kharlyngdoh said Awasthi is temporarily allowed to look after the DGP office in addition to his current assignment as the DG of Civil Defence and Home Guards as the incumbent Director General of Police Dr SB Singh retired on Tuesday.

This order shall immediately cease on appointment of a full fledged DGP of Meghalaya, the notification further said.