Meghalaya: Over 85% turnout at Ranikor, 72.89% polling recorded at South Tura 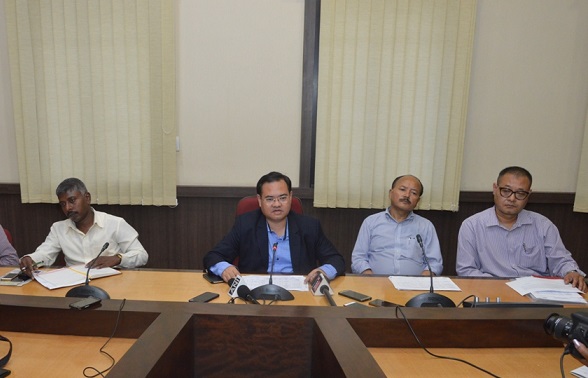 Around 85.89 per cent of voters in Ranikor and 72.89 per cent in South Tura exercised their franchise in the by-elections held in the two seats in Meghalaya on Thursday.

Tight security was deployed in polling stations of both the constituencies.

The by-elections will decide the fate of Meghalaya Chief Minister Conrad Kongkal Sangma who is seeking election from South Tura constituency in order to continue as Chief Minister of the state. It will also decide the fate of Conrad’s three other opponents, Charlotte W Momin of the opposition Congress, and two Independents – former MLA of South Tura, John Leslee K Sangma and Chris Kabul Sangma.

Similarly, the by-election to Ranikor will decide the fate of former Assembly Speaker and five-time MLA, Martin M Danggo who deserted the Congress and joined the National People’s Party as its candidate. Danggo is fighting with three opponents which include, Pius Marweiñ of the United Democratic Party, former Mawsynram MLA P N Syiem of the People’s Democratic Front and Jackuish Sangma of the Congress.

Chief Electoral Officer, F R Kharkongor said that 85.89 per cent voting was recorded in Ranikor. More reports yet to come from some polling stations which are yet to be connected by roads.

The voting was 89.5 per cent in Ranikor constituency in the Assembly polls held on February 27 this year.

He said that South Tura recorded 72.89 per cent, and the turnout in the last Assembly polls in South Tura was 73.59 per cent.

The polling started at 7 am in 65 polling booths in Ranikor and 36 in South Tura and ended at 5 pm. But those voters, who stood in queues in few polling stations even after 5 pm, were allowed to cast their vote.

“The voting percentage in both the constituencies will increase once we receive reports from all polling stations of the two constituencies. We are also yet to calculate the votes cast through postal ballots,” Kharkongor said.

He said that inclement weather was reported in some polling stations of Ranikor constituency during the early hours of voting.

“The conduct of the by-elections in both the seats was by and large smooth except few glitches where malfunctioning of voting machines was reported during the first hour of polling. The problems were addressed promptly and the voting continued and ended smoothly,” he said.

Kharkongor said that unlike in the last Assembly elections, the data recorded in voting machines during the mock poll in both the constituencies were successfully cleared without any hitch, after which, the real voting commenced.

As ten polling stations yet to be connected by road, the election authority utilized the service of 10 runners in transmitting information from the polling stations to sector officers when the voting was in progress.

Kharkongor said that the runners gave timely updates to sector officers on voting percentage and other relevant information.

There was no report malfunctioning of voting machines in the ten non-motorable polling booths.

For Ranikor, votes will be counted on August 27 at Mawkyrwat for South Tura, at Social Mobilization Experimentation and Learning Centre (SMELC) at Dakopgre, Tura.

Kharkongor said that one company of CAPF will be deployed in each counting centre.