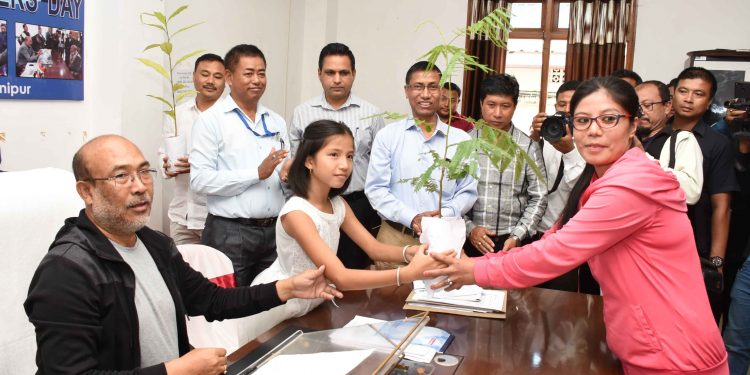 A mass tree plantation would be done at Koubru hill range in Manipur.

This will be done under the ongoing Chief Minister’s Green Manipur Mission in the State.

This was stated by state chief minister N Biren Singh on Wednesday.

His said this while interacting with media persons on the sidelines of joint ‘Meeyamgi Numit’ (People’s day) and Hill Leaders’ Dayat Durbar Hall of Chief Minister’s Secretariat in Imphal.

Chief minister Biren also informed that DGP Manipur L M Khaute had been entrusted to discuss with different civil society organizations to chalk out a plan to replace poppy plantation by an alternative livelihood and mass tree plantation.

‘Meeyamgi Numit’ and Hill Leaders’ Day are organized by the State Government since May 2017 to hear the grievances of the public.

He informed civil society organization of Senapati district had approached him to join hand in mass destruction of poppy plants.

He also admitted his Government would ink an Memorandum of Understanding with 207 villages of Ukhrul district which are to ready to reserve five to 10 acres of their village land for forest development under Green Manipur Mission.

In the day’s joint ‘Meeyamgi Numit’ and Hill Leaders’ Day the chief minister heard around 360 complaints and met around 1000 people within four hours till 1 pm.

Earlier welcoming the nine-year-old girl from Wabagai in Kakching district Biren encouraged her to keep on encouraging people to plant more and more trees.

The chief minister also appealed the people to plant more trees and nurture them in their vicinity.

On the other hand chief minister Biren also informed that an official team would be sent to Shillong to inspect the present condition of Manipur Rajbari.

Biren said there are some issues due to encroachments on Rajbari complex.

He said he had talked to his Meghalaya counterpart in this connection with the present issue.

Biren said the development of the place associated with the history of Manipur would begin without delay with funds from the state budget once the standing issue is settled.

On Nambul Rejuvenation Project, he said that the Centre had sanctioned Rs 15 crore for the second phase of the project.

The project would be taken up at an estimated cost of around Rs 500 crores, he informed.