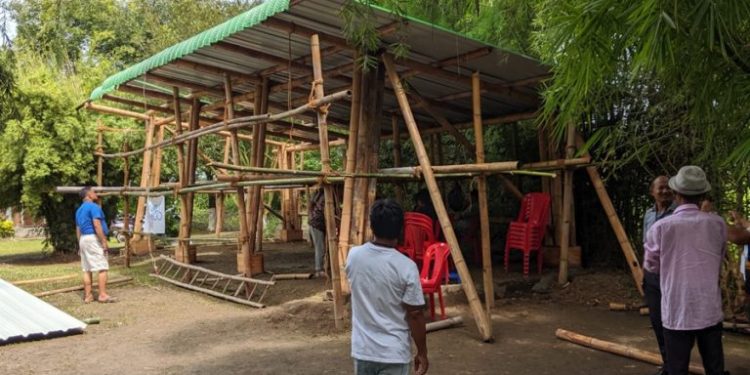 A model of ‘Bus shelter’ (or bamboo bus stand) was developed using modern application and technology on bamboo in Manipur.

It was done during the five day Bamboo Construction workshop which concluded at a Crafts complex Patsoi part-I in the outskirts of Imphal city on Tuesday.

It was part of observing the 10th edition of the World Bamboo Day (WBD) observed in the state on September 18.

The bus shelter made of ‘maribob'(Dendrocalamus latiflorus), a bamboo species found in Manipur, using modern application and technology is expected to be used as model bus shelter in and around Imphal city sooner or later.

Once the model is approved and implemented in Imphal and other towns of Manipur, then Green and Clean Manipur can be created by using Bamboo as building materials, a bamboo promoter in Imphal said.

“We’ve even made a proposal to construct such kind of bus shelter under MP’s local area development fund,” says Kamesh Salam, Chief Executive Officer of SABF.

These include bamboo designs, laminates, furniture, plantation, value chain, environments and bamboo constructions during the workshop and it was followed by group discussion.

About 35 young artisans, bamboo construction workers, entrepreneurs, architects from Manipur who participated in the Workshop which was started from September 18, also actively involved in practical workshop.

It involved various housing technology under the supervision of architect P B Goswami, E Ajit Singh and SABF’s technical team.

Training was given on design of frames & trusses, architectural designs and engineering of structures.

Practical lessons, general introduction into the anatomy of bamboo, proper preservation and grading methods, drying, storage and targeted markets were also imparted during the workshop.

The mobile App ‘BamTech’ of SABF was used as teaching method.