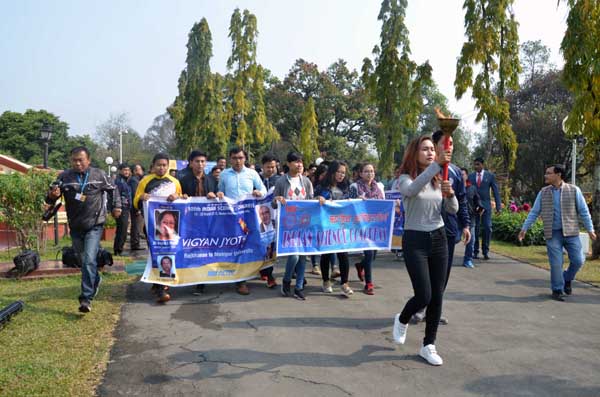 A Vigyan Jyoti rally was held from the Imphal Raj Bhavan to Manipur University campus at Canchipur on Wednesday.

This rally was a part of Pride of India (PoI) Expo in for the upcoming 105th Indian Science Congress(ISC) in Manipur University.

PoI expo is a mega science exhibition and a major attraction of the ISC which is scheduled to be held from March 16-20 at the university campus.  The theme of this year’s ISC is “Reaching the unreached through Science and Technology.”

Manipur Governor Dr Najma Hepulla was the Chief Guest of the formal flagging off ceremony of Vigyan Jyoti rally at Raj Bhavan this morning.

Speaking on the occasion, Governor Heptullah said, “We as students of science should not separate science from our daily lives, instead we should understand where the sciences are involved, the food we eat, the bounty of nature are all connected to science, students must have scientific temperament. This (Indian) Science Congress is very good especially for the students, it has children and Women’s congress. There is no age bar for knowledge.

She said that, she has been involved in Science Congress since her student’s days and is a member of Women’s Scientists Association, while also expressing her happiness that the 105th ISC is happening in Manipur.

She stressed on the importance of maintaining the biodiversity and the nature, she encouraged to plant more trees, to take care of nature and not only exploit it and to keep ourselves and our surroundings clean. That is the message our Prime Minister wants to convey, added the Governor.