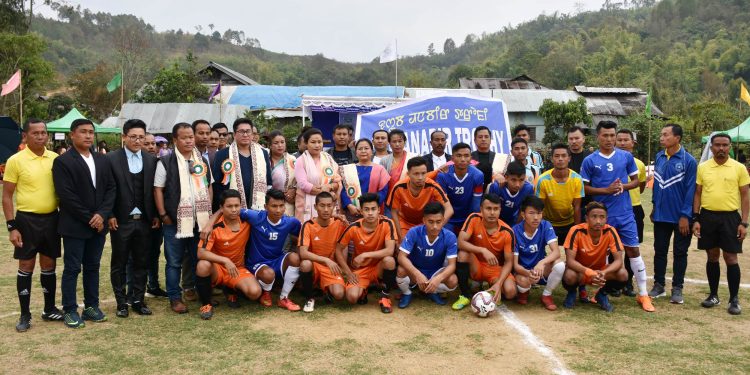 State social welfare and cooperation minister Nemcha Kipgen, minister of forest & environment Thounaojam Shyamkumar who also holds the MAHUD and town planning portfolios and member of 16 Tulihal Zila Parishad, Kongbram Inaocha besides social worker Thangjam Arun and others were present during the closing function of the tourney.

Addressing the gathering, minister Nemcha acknowledged that Manipur have so far produced many famous footballers in the national and international levels.

She expressed that such tournament held at the village level gives platforms for football enthusiasts at the grassroots levels.

Nemcha encouraged the youths specially sports players to maintain a strict and disciplined lifestyle in order to excel in their sporting career.

She also mentioned the importance of education too for the players as it forms the base of all personality development.

She also highlighted that the state government under the initiative of chief minister N Biren Singh have recently installed flood lighting in Khuman Lampak as a form of encouragement to the football players to experience the games in all forms and also to introduce many more successful football players from Manipur.

The final match of the tourney was played between Dhanabir FC, Angtha and Sanjenbam FC.