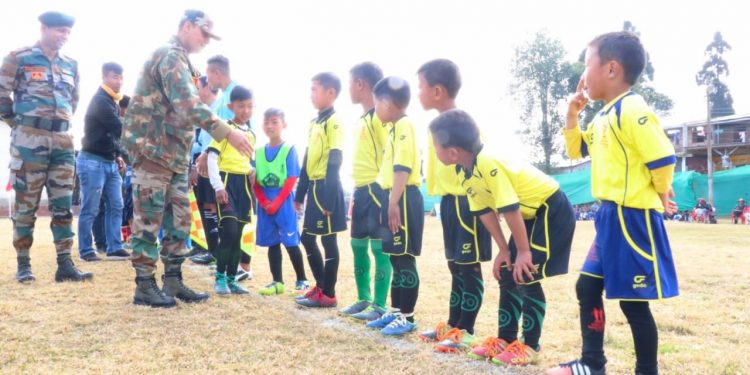 The second edition of Baby League 2020 was formally inaugurated at Tahao Ground in Manipur’s Ukhrul District on Monday.

The baby league is an effort to development football at the grassroots level and provide an opportunity to budding talents to play and learn the game in a competitive manner.

The three-day tournament for the grassroots footballers also known as Baby Football Cup is organized by the Somsai Battalion of 10 Sector Assam Rifles under the aegis of Headquarters Inspector General of Assam Rifles (South).

Eight teams have registered for participation in the tournament and the teams will be contesting against each other in two pools of four teams each.

This was informed in a press statement issued by the PRO Assam Rifles (South).

Assam Rifles has been instrumental in shaping the young football talents of Ukhrul district.

The Baby League has been conducted as the second of its kind in India after Meghalaya which is organized by Assam Rifles under the banner of Late Major Bob Khathing Ralenganao to commemorate his 108th birth anniversary this year.

In January 2019, Toubul Youth & Development Association (TYDA) and 8one Foundation organized its first Baby League in the Bishnupur district.

It was 8one’s second Baby League in the Northeast, after conducting India’s first one in Chhampai, Mizoram in 2017.

8one Foundation aims to affect pragmatic sustainable progress, with social development taking priority over other interpretations of the term ‘development.’

In another development, the Joupi Battalion of 28 Sector Assam Rifles organized a Special Sports Competition at Tuiyang village in Chandel district administration under Khenjoy Sub Division in Manipur, the release said.

The event was organized as part of promoting ‘Fit India Movement’ and also to keep the children busy during their vacation.

A total of 110 children including 52 girls of Tuiyang and Hollenjang villages participated in the drawing competition. Subsequently, other events such as Jalebi Race, Juice Race, Jodi Race and Samosa Race were conducted.