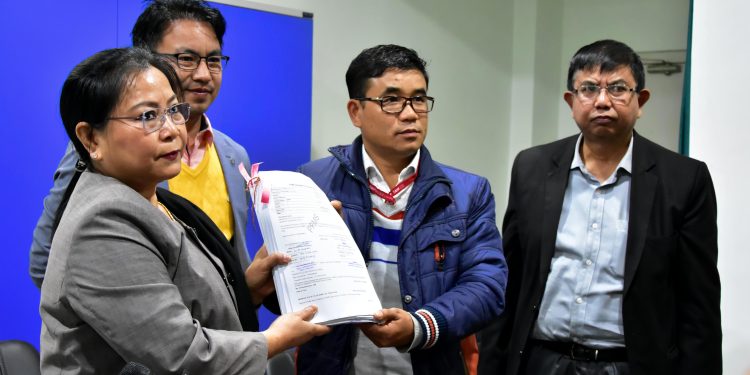 The fund for Manipur Old Age Pension (MOAP) scheme was disbursed through direct benefit transfer to 20, 833 beneficiaries in the State.

The fund was received through the BJP-led coalition government’s ‘Go to Village’ (GTV) Mission which was launched to address the grievances of the villagers living under 60 assembly constituencies on May 1 last year.

Manipur social welfare minister Nemcha Kipgen shared the report of disbursing the funds to the respective beneficiaries while speaking to media persons at her office at Manipur Secretariat New Block.

Minister Nemcha expressed that such landmark feat of the Social Welfare Department, Manipur to reach the deserving beneficiaries to every nook and corner of the state was possible through GTV program.

She also stated that it is through GTV mission many people were aware of the various welfare schemes, project and programmes of the government at the convenient of their doorstep.

Social welfare minister also informed that funds for most of the governmental schemes of the department are now given through Direct Benefit Transfer (DBT) with an aim to avoid any misappropriation of funds by any third party.

It may be mentioned that chief minister N Biren Singh launched GTV programme in 60 villages of all the 60 Assembly constituencies in the State last year.

Since then the Government has been identifying eligible and deserving beneficiaries and deliver government services at their doorsteps as there are 2,515 census villages in the State and the data collection of the requirements of those villages would be completed within 11 months.