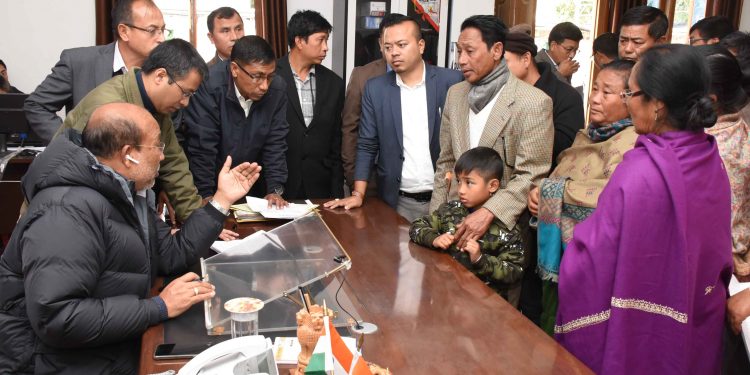 Manipur government is planning to construct a new Manipur Bhawan at Dwarka in New Delhi.

For this a land measuring an area of one acre has been procured.

This was disclosed by the state chief minister N Biren Singh while speaking to media persons on the sidelines of the joint ‘Meeyamgi Numit’ (People’s Day) and Hill Leaders’ Day held at chief minister’s Durbar Hall on Wednesday.

Chief minister N Biren also informed that a total of 20 rooms equipped with medical ventilators will also be included in the new Manipur Bhawan at Dwarka so as to facilitate those people who are going for medical treatment to Delhi.

He also expressed the need to dismantle two Manipur Bhawans located at New Delhi soon for its upgradation.

A sum of Rs 150 crores will be required for the entire purpose, he added.

Similar Manipur Bhawans will be constructed at Mumbai, Kolkata and Bengaluru soon.

He said that the primary objective of the present government is to bridge the gap between the people and government and to deliver good governance.

Maintaining that with the love and support of the people, the government could maintain a peaceful and cohesive environment in the State, he continued that the trust and confidence between the hills and valley of the State has also been regained.

Hailing the Manipur State Co-Operative Bank for extending help to the people, the chief minister said the bank received a total of around 1800 applications for providing soft loans from various individuals, Self Help Groups (SHGs) etc.

Among them around 1181 applications were shortlisted and around Rs 10 crores has been sanctioned to 400 individuals and SHGs, he added.

Mentioning the alleged discrepancies in the Socio-Economic Caste Census 2011 data, the chief minister informed that the State Government is considering to form a committee to look into the errors of inclusion of genuine households in the Socio-Economic Caste Census data so that needy people could get benefits under Pradhan Mantri Jan Arogya Yojana.

Regarding the ongoing stir by the teachers of SSA and RMSA, the chief minister informed that the government is actively considering their demands and will invite their representatives for talks to resolve the issue.

In the day’s combined Meeyamgi Numit and Hill Leaders’ Day, the chief minister personally heard about 350 complaints and met around 1000 people from different parts of the State from 9 am to 1 pm.