The much-awaited 3-day National Indigenous Seeds Festival 2019 has been underway at the Central Agricultural University (CAU) campus, Iroishemba on the outskirts of Imphal.

Addressing the inaugural function at the auditorium of the CAU, vice chancellor Dr Premjit Singh of the agricultural varsity expressed the need to have a proper government policy to address the issue of conserving indigenous and traditional seeds for future food and nutritional security.

CAU is the largest agricultural university in India having 13 colleges and 6 Krishi Vigyan Kendras across the seven northeastern states excluding Assam besides having its headquarters in Imphal.

But it is very difficult to maintain all the traditional rice varieties.

“So, we need to have a proper government policy so that the poor farmers, who have been conserving such traditional seed varieties, could be incentivized or their grievances can be addressed,” added Dr Singh.

VC Dr Singh also informed the gathering that CAU would develop 20 model fruit villages in the entire northeastern states to enhance the economy of the underprivileged farmers.

Northeast, being a biodiversity hotspot, contributes 7,000 species out of India’s total flora of 17,000 species besides having more than 9650 rice varieties.

In his speech, Dr RK Nimai urged the common people, particularly the farming community in the region to look for sustainable agriculture considering the public demand in this era of climate change.

He termed the climate change as a ‘national phenomenon’ and global warming as an anthropogenic pressure.

He also highlighted the challenges faced by farming community in undergoing the organic or natural farming due to sudden pest invasions and expressed the need to have a proper documentation of the agricultural activities. 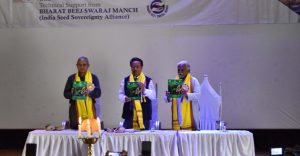 President Jacob Nellithanam of Bharat Beej Swaraj Manch, a partner organiser of the festival, told Northeast Now on the sidelines of the day’s event that there’s the need to conserve native indigenous seeds of different types of crops so that the gene can be used as an instrument to combat or mitigate the failure of crops by climate change.

President Potshangbam Devkanta of All Manipur Trained Medicinal and Aromatic Plants Promoters Consortium told the media on the sidelines of the event that around 20 indigenous rice varieties have vanished from Manipur in the past 15 years or so due to various factors.

All Manipur Trained Medicinal and Aromatic Plants Promoters Consortium, the main organiser of the seeds festival, currently maintains more than 100 traditional rice varieties in the state.

The festival, which will continue till Monday, was attended by farmers and NGO leaders from 15 states of the country besides many renowned cultivators both from hills and valley.