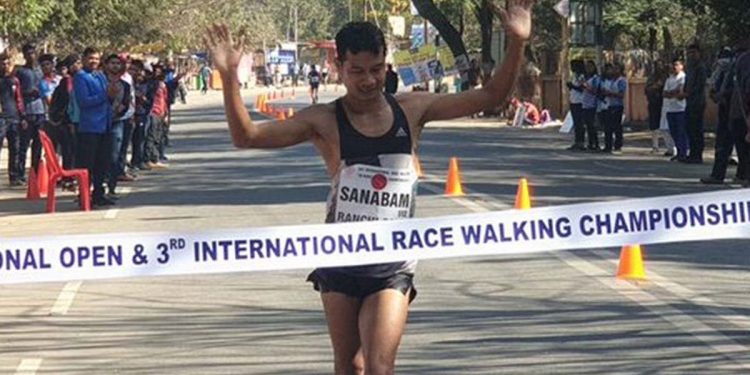 Sanabam Daman Singh from Manipur has brought laurels to the state by winning the men’s 50km race walk event in final day of the National Championships at Ranchi on Sunday.

According to reports, 30-year-old Sanabam Daman Singh won the event in 4 hours, 8 minutes and 10 seconds.

Saying that they are “proud” of Sanabam Daman, the Manipur CM said, “hope that you will shine our India in the international arenas”.

Power house of the Indian sports Manipur's #DamanSingh wins 50km race walk event in #NationalChampionships . We proud of you and hope that you will shine our India in the international arenas.

It has been reported that Punjab’s 35-year-old Gurpreet Singh stood second with a timing of 4:09:44s while Uttar Pradesh’s Anjani Singh finished third clocking 4:22:37s.

The winner of 2019, Jitendra Rathore from Rajasthan and the runner-up, Sagar Joshi from Gujarat were among the 8 competitors who could not finish the race.

As per the report, in the men’s Under-20 10km race walk event, Amit from Haryana won the gold with a national record time of 40 minutes 28 seconds breaking the earlier mark set by Akshdeep Singh in the National Junior Athletics Championships in 2018.

He led a bunch of six athletes who breached the World Junior Athletics Championships qualification standard of 43:30s.

Baljeet Kaur from Punjab finished one second slower than the world standard.